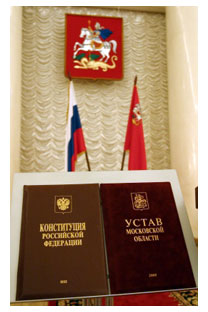 The legislation, which will also extend term limits for State Duma deputies from four to five years, is expected to sail through the Kremlin-controlled Duma, although not likely by the Constitution Day holiday on Dec. 12

As president, Vladimir Putin faced pressure to amend the Constitution to stay in office beyond eight years. But he refrained from touching the 1993 document, apparently in part to avoid being lumped together by the West with strongmen such as Alexander Lukashenko of Belarus and Nursultan Nazerbayev of Kazakhstan, who changed their countries' constitutions to extend their reigns.

Medvedev, in announcing the constitutional amendments last Wednesday, said he wanted to extend the presidential term to enable the government to implement reforms more effectively. The extension would not apply to the current term, Kremlin aides say.

The halls of government have been filled with speculation over whether the change is an attempt to return Prime Minister Putin to the Kremlin for two, six-year terms or to give Medvedev an extended second term.

"We don't understand anything about what is going on," said a Cabinet official, speaking on condition of anonymity for fear of reprisals. "We don't know whether the move is intended to smooth the way for [Putin] to come back to the Kremlin or for some other reason.

"We live in a country where anything is possible. The decision will be made in secret and at the last moment," he said, adding that sometimes government officials only learn that they have been appointed to new posts from the media.

The official likened the current uncertainty to the atmosphere in the months before Putin abruptly named Medvedev as his preferred successor last December. In the run-up to that announcement, rumors ran fierce that Putin might bow to enormous pressure to amend the Constitution.

Duma Deputy Viktor Ilyukhin, a Communist, said he expected the constitutional amendments to clear the chamber within two months. After that, it will need to be approved by the Federation Council and then by two-thirds of the regional parliaments.

Ilyukhin said Medvedev should be focusing on the financial crisis, not amending the Constitution.

"The country is now facing a serious crisis and Medvedev is changing the Constitution," Ilyukhin said.

He also accused Medvedev of using the crisis to his own ends, noting that Putin had used the Beslan school attack in 2004 as a reason to end the popular election of governors.

Medvedev has worked in tangent with Putin since assuming office in May, and political analysts said the two must have agreed on the constitutional changes.

"Everything was ready a long time ago," said Yury Korgunyuk, an analyst with the Indem think tank.

Stanislav Belkovsky, head of the National Strategy Institute, said he did not believe that Medvedev would not leave early for Putin. "Putin had the chance to stay on, but he didn't use it," Belkovsky said.

National media reports have suggested that Medvedev might step down as early as next year, perhaps on the pretext of the need for a new election under a new Constitution, clearing the way for Putin to return.

The Cabinet official said he also doubted that Medvedev would use the constitutional amendments as a pretext to leave before the end of his term. But he added that he had heard rumors since Putin's first day as prime minister that he was already tired of being the prime minister.

Putin's spokesman Dmitry Peskov dismissed talk that Putin might become president again as media speculation and said Putin was happy in his position as prime minister.