Beyond the crisis: a world made of BRICs 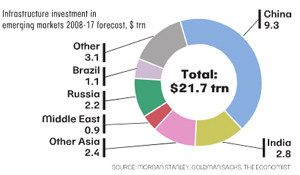 Since then, governments have been hastily working out massive bailout plans for their banking systems, in the United States, the European Union, Russia, South Korea, and elsewhere. This was a long awaited recognition that radical measures were needed to avoid a global collapse given the huge amount of outstanding derivatives and other off-the-balance-sheet liabilities threatening the stability of the global financial system.

Despite this massive effort, it is clear that the large developed economies will undergo one of their most difficult periods in many decades. The deleveraging process will be long and painful because the liquidity crisis has translated into a permanent increase in the cost of capital which makes the current downturn much more pronounced than previous ones.

It is also clear that some medium-sized emerging economies such as Hungary, Turkey or Ukraine, that relied heavily on foreign capital to fuel their domestic growth, are feeling the heat as foreign investors start to repatriate capital to safer places. Hungary and Ukraine are in the process of being bailed-out by the IMF and will have to sacrifice growth for some years. Turkey has also seen large outflows of capital, but it is in better shape now than at the start of the decade when the country had to devalue its currency and drastically restructure its economy.

The key question, however, is the impact of the crisis on the "trillion plus" emerging economies of China, India, Brazil, Russia, Mexico, and Korea, and the extent to which it could jeopardize their long term growth potential.

In this regard, China and India have been relatively spared thanks to their lack of financial integration with the world. By contrast, there is sobering news coming from Russia, Mexico and Brazil, where healthy companies now struggle to roll over debt due to foreign investors. As a matter of fact, in the past few weeks the yield on corporate bonds of leading Mexican companies such as Cemex and Telmex have skyrocketed. Mexican and Brazilian companies are facing billions of losses because of the sharp depreciation of their domestic currencies against the US dollar. Finally, Russian oligarchs are desperately asking for and getting - at a heavy price - the support of the Kremlin to pay back foreign creditors who threatened to seize large shares of Russian companies, which were pledged as a collateral for loans.

Nevertheless, the situation is in no way comparable to the nineties where one big emerging country defaulted after the other. The liquidity problems faced today by Russian, Brazilian, or Mexican companies are much more manageable than the solvency problems faced by their governments a decade ago. With huge foreign exchange reserves of over half a trillion US dollars, Russia has made it clear that it can deal with the crisis without external help. Mexico, Brazil, and South Korea also have reasonable foreign exchange reserves. Besides, they are supported by the Federal Reserve which has committed USD50 billion to each of these countries in currency swap agreements, as a recognition of their "systemic importance". In addition, all these countries have actioned comprehensive bailout plans for their financial sectors and for their blue chip companies through state-guaranteed liquidity lines, injections of capital, tax exemptions and the like.

Most importantly, when the dust settles and the world economy gradually recovers from the crisis, the new expansion cycle will be, by all accounts, dominated by the BRIC economies. China will get out almost unaffected by the crisis. The likely slowdown of the Chinese economy in 2009 will probably be very moderate because it will be cushioned by the massive spending plan announced by the Government to boost the construction sector and support falling house prices. The slowdown will result in a much welcome consolidation across a wide spectrum of industries ranging from mining, power generation, automotive, and white label manufacturing, to real estate development and financial services.

In a year or two from now, Chinese large banks and manufacturing companies backed by the state could take over some iconic brand names in the Western world. Take the automotive industry. While the "big three" US carmakers, GM (GM), Chrysler and Ford (F) are on the brink of bankruptcy, the booming Chinese car industry is moving forward thanks to a rapidly growing domestic market and to the ever improving quality of local brands which benefited from partnerships with Western car makers. The Obama administration will likely welcome any foreign investments in this distressed sector rather than running the risk of losing hundreds of thousands of jobs. No doubt, China has the will and the financial resources to become a superpower, but it still has to transform itself and achieve its democratic transition, under the pressure of a growing urban middle class.

The Russian economy will escape a 1998 style collapse and consolidate its influence in regional and world affairs as a global supplier of energy and military technology. No matter how mistrustful Russia's political elite may appear to the West, there is no choice but to cooperate with them and include them in the game, in order to concentrate on the weak spot of the planet, namely the Middle East. On the other hand, Russia's renaissance as a global power is far from granted, as it will depend critically on the government's ability to move to a knowledge based economy from its current over reliance on natural resources.

Finally, among the BRIC countries, India and Brazil are probably going to make the most important breakthrough in the coming years. They have unleashed their growth potential only in the nineties (in 1991 for India and 1994 for Brazil) and much of their growth acceleration still lies ahead. Contrary to China and Russia, India and Brazil will continue to benefit from the "demographic dividend" with a growing working-age population.

Brazil is not only one of the world's biggest and most diversified commodity producers, it is also becoming a major competitor in high-end technologies, with a competitive edge in cleantechs and renewable energies. Brazil's most acute problem, the low average level of education of its 190 million population is being addressed by comprehensive social programs such as Bolsa Familia, which encourages poor families to send their children to school. As a result, the gap between the poor and the rich, deemed to be the highest in the world, will gradually narrow in the next decade, paving the way for a growth potential closer to the 10% magical threshold.

Last but not least, India, the world's largest democracy, has recently decided to tackle the infrastructure problem with a massive investment program over the next 20 years. It has set up one of the most investor-friendly PPP legislations and is attracting foreign capital from all over the world to help it, literally, bridge the gap. Education is still a daunting issue for hundreds of millions of peasants kept out of the "shining India" picture. However, the liberalization of the economy has unleashed the energy of millions of entrepreneurs and has considerably improved social mobility, leading to a widening of the middle class. There are opportunities in almost every sector and the so-called "licence raj" has substantially decreased over the last years. True, India still has a long way to go before it joins the club of advanced nations, but it already has serious credentials in information sciences, nuclear engineering or space technology.

All in all, retreating now from emerging markets, and from the BRIC countries in particular, although seemingly rational in an environment of high risk aversion and liquidity dearth, would be a serious mistake in the long run, given the almost intact growth potential of these economies and given their importance in shaping tomorrow's world, far beyond the current crisis.