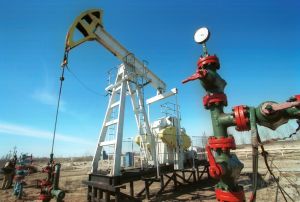 They discussed overall Russian-Indian trade and economic relations with a focus on energy dialogue. Among the subjects considered in the talks was participation of Indian partners in the Sakha-lin-1 project and possibilities for greater involvement of Indian business in other oil ventures. Prospects of Russian and Indian business cooperation in nuclear and electric power industries were also discussed during the talks.

India's eagerness to cooperate with Russia is understandable. Global oil production is shrink-ing faster than previously assumed. According to a recent report of the International Energy Agency (IEA) World Energy Outlook to 2030, oil shortage will be forcing countries to contend for resources in three of the world's regions, i.e. the North Sea, Alaska and Russia, with competition over Russia's oil reserves particularly intense in the next few years. As seen by the IEA, falling oil prices and lower investment in the oil industry will make the struggle for oil and gas resources increasingly fierce over the long term.
According to forecasts, China, India and other developing countries will have to invest in the oil industry about $360 bln annually to reduce the deficit of resources or at least to maintain the current output. Due to global energy shortages the struggle for resources will only intensify in the regions where they are still plentiful.

Competition between India and China in the Russian energy market is in the spotlight of international media. The agreement Transneft and CNPC on construction of Skovorodino-Daqing branch of the East Siberia - Pacific Ocean oil pipeline (Russian acronym VSTO) to supply 15 mln tons of oil per year between has triggered fresh speculations about the competition.
That some competition indeed exists is evident, for instance, in the bidding for Udmurtneft, won by the Chinese. Yet, Indian oil companies, too, have been making inroads in Russia.

According to unofficial sources, the meeting of Putin and Deora resulted in approval by Russia's Federal Antimonopoly Service of the takeover of Imperial Energy, a British energy com-pany operating in Russia, by India's Oil and Natural Gas Corp. The FAS took the decision following t finding of the Ministry of Natural Resources that Imperial Energy has no strategically important assets. The FAS decision is expected to be formally announced before the end of this year.

Imperial Energy operates mostly in the Tomsk Region. The company holds twelve licenses in Russia and one in Kazakhstan. As of the end of 2007, its reserves were 125.5m tons of oil equivalent. In 2007, the company's revenue was US$20m, with US$43m net loss. Oil output during the year amounted to 114,300 tons.

During the meeting in Moscow Mr. Deora suggested that the two countries' state-owned companies jointly produce oil in East Siberia and Sakhalin. The Minister expressed India's interest in setting up a joint venture between ONGC Videsh Limited (OVL) and Rosneft to implement oil production and development projects in Eastern Siberia, as well as India's specific in-terest to participate in Sakhalin-3.

It is notable that ONGC Videsh Limited (OVL) acquired a 20% share in Sakhalin-1 back in 2001. The reserves of the Sakhalin-1 gas field, being developed since 1996, are estimated at 485 bln cubic meters. Exxon Neftegas Limited and Sodeco each holds 30% in the project, while Rosneft and ONGC own the remaining stake, with 20% each.

Sakhalin-3 is a promising oil and gas project at the Sakhalin coastline. The reserves are esti-mated at 700m tons of oil and 1.3 trillion cubic metres of natural gas. Rosneft holds a license for development of one of Sakhalin-3 license blocks.

India's Oil & Natural Gas Corp. could become a partner of China's Sinopec in the Sakhalin-3 project by acquiring 23% share from Rosneft. Experts believe the deal would help current pro-ject participants to raising additional funds. Sakhalin-3 comprises four license blocks whose ag-gregate reserves are estimated to exceed 600m tons of hydrocarbons. These are the Veninsky, Vostochno-Odoptinsky, Ayashsky and Yuzhno-Kirinsky blocks; the latter three are registered in the undistributed subsurface reserves fund. Rosneft's share in the Veninsky Block is 74.9%; the remaining 25.1% belong to Sinopec, which has to finance 75% the project's exploration costs.

India's eagerness to enter Sakhalin-3 has come to be a subject of media speculations, a typical example of which is the article by John Helmer in Asiatimes, dramatically titled India Plays at Russian Imperial Roulette:
"If the Indians want to march into a new auction, and oblige the Chinese to step aside, they are dreaming. Rosneft spokesman Nikolai Manelov told Asia Times Online: "The current status [of Veninsky] is exploration. We are going to value the reserves there very soon. I am not authorized to comment on what is going to happen next. I am also not commenting on other companies, so I can't answer your question regarding ONGC." Whether Rosneft intends to be ONGC's silent partner, or simply silent, will become clear in a few days' time. The outcome will speak volumes about the effectiveness of India's oilmen in competition with the Chinese."

Such provocative language was not accidental. Many in the West look disapprovingly at the emerging energy alliance of the three largest Euro-Asian nations. Although the Moscow-Beijing-Deli alliance has not until recently, been viewed seriously, it is inconspicuously taking shape. A US publication, Power and Interest News Report, has written that, in effect, growing Indian-Russian energy cooperation resurrects former Russian Prime Minister Yevgeny Primakov's idea of a strategic triangle between Russia, India and China."

At a time of a global crisis, energy partnership of the three nations could translate into closer financial and economic cooperation with a view to changing the existing bankrupt global financial system. Under such circumstances, it is clear that concessions to both China and India in terms of their access to the Russian energy resources are all but inevitable. It has been reported that a high-ranking official from the office of Russia's President assured that Russia would seek agreement on cooperation with both countries: "We cannot ignore either India or China. Both partners are equally important to us." He recalled that each country accounts for 40% of Russian arms exports. This was said before the crisis. Now the financial factor has kicked in.

Thus, speculations about the emerging multilateral oil alliance are gaining geopolitical weight. As the Mexican newspaper La Jornada wrote recently, "very little is known about India's energy moves in the strategic game being played. Yet, it should be noted that India, along with Russia, China and Iran, has concluded a secret alliance and become a part of an energy quadrangle." Moreover, "...this quadrangle of Russia, China, Iran and India could become a `pentagon' if Kazakhstan joined this alliance as part of India's Central Asian policy aimed at building a so called `North-South energy corridor'."
But even irrespective of such political geometry, prospects for Russian-Indian cooperation are clearly improving. Collaboration of both countries in the energy sector is based on the two pillars of historical tradition and mutual respect and friendship. The time appears to be right for serious projects.