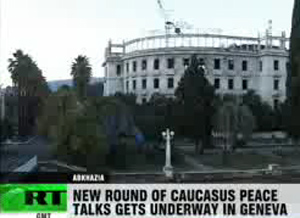 It's the second round of the talks brokered by the UN, EU and OSCE. The first round ended last month without result when the Georgian delegation refused to negotiate with the newly recognised republics.

The talks will focus on security in the region. The issue of how to get refugees who've been displaced by war and conflict in the area back to their homes will also be on the agenda.

Abkhazia has recently been shaken by a series of explosions. Local authorities have accused Georgian special services of being involved. They say there have been numerous attempts by Tbilisi to reclaim the breakaway territory, and now it's using scare tactics in the bordering regions of Abkhazia to spread fear and terror among the locals.

Sergey Shamba, Abkhazian Foreign Minister, says "security is the top priority, but it's hard to fight terrorism when you have such an aggressive neighbour."

Russia recognised Abkhazia's independence and signed a friendship agreement with the republic.

Abkhazia is a small republic by the Black sea that has been isolated from the rest of the world for more than 15 years. It used to be a part of the Soviet Republic of Georgia, but it declared independence in 1992.

Georgia launched a military operation against the breakaway territory, but it failed. Russian peacekeepers and UN observers kept the conflicting sides separated.

However, in the past couple of years there have been several terrorist attacks in Abkhazia.