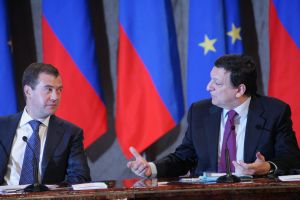 The EU agreed last Monday, albeit not unanimously, to re-start talks over a partnership agreement with Russia that had been suspended following the conflict between Georgia and Russia earlier this year.

Consequent to Russia's strong military response, which many EU countries' foreign ministers deemed as "disproportionate," to Georgia's attempt at re-securing its secessionist regions of South Ossetia and Abkhazia, there was no shortage of outrage voiced. All of that outrage, if not swept under the rug, has been put to the side as of last week, demonstrating that progress in EU-Russian relations on economic and political fronts is more important than making noise about the issues that divide Georgia and Russia.

Previous EU pronouncements had focused on the insistence that all Russian troops should return to the pre-conflict boundaries outside of Georgia. This too has been put to the side; there remain thousands more Russian troops in both South Ossetia and Abkhazia than had been there before the conflict. The point, the EU seems to be saying, is that Russia has withdrawn from non-secessionist regions of Georgia and has abided by the acknowledgment of sovereignty for Georgia outside of South Ossetia and Abkhazia.

From the EU countries, only Lithuania still opposes talks with Russia on partnership, but in order for negotiations to begin, there is no need for unanimity. Other EU countries, citing the need for complex negotiations on energy and transport policy and other related policies to proceed, are willing to begin talks once again.

Such a re-start to discussions with Russia is in some ways inevitable. The issue of energy for European countries is a very important concern and it cannot be sidestepped indefinitely. Yet, this re-start highlights the question as to whether Russia has been suitably "punished" and what that means exactly as a further issue. Just a few months ago, many of the EU members led by the French President Nicolas Sarkozy, were saying - at least publicly - that Russia's use of force could not stand in South Ossetia and Abkhazia, whatever the cause may be for initiating the conflict.

Sure, Europe could have fined/closed the companies, suspended the bank accounts, and barred the gates of the villas of the pro-Kremlin Russian oligarchs in European countries, but this would have been at best an indirect reply to the conflict, and would have made the situation far worse in some aspects, especially by encouraging bolder moves by those oligarchs close to Medvedev and Putin. Those money-men could have quite probably been bailed out by the Kremlin using Russia's hard-currency reserves, and following that, they would have been far less likely willing to improve terms for Europe in setting energy and transport policy in the future.

Privately, European leaders no doubt knew that one day, Monday, 10 November 2008 would come. There would be a day, sometime in the future, when Russia would abide by some degree of the spirit of the Russo-Georgia cease-fire accords, if not the letter of the agreement, and would be deemed to be ready for further negotiations over other policies of more direct significance to European Union states, such as the question of Russia's monopolistic moves towards oil and gas transport.

In reality, the EU never had any real standing for long-term punishment of Russia. Outside of making a lot of public rattle, the EU had no actual ability for political, economic, or military response to the desire of Russia to enforce independence for its client states in South Ossetia and Abkhazia. Even the United States could only fly in aid, make political gestures such as sending the Vice President Dick Cheney to Azerbaijan and have American warships leading a symbolic NATO naval presence in and near Georgia's lone remaining secure Black Sea port of Batumi.

On the heels of this EU development, the Russian news source Rambler is reporting that the American press attaché to Russia has announced that negotiations over the issue of "strategic safety" and the anti-missile shield will begin in December between the United States and Russia, signaling how the recent threatened deployment of Russian missiles in Kaliningrad has overshadowed "lesser" defense issues such as the Georgia situation.

Russia knew when it launched the counter-strike against Georgia's anti-secessionist military operations that international outrage would sooner or later slowly die down. Eventually, one by one, negotiations would begin again, pretty much on the same basis that they had been before the conflict.

Georgia, for its part, recognizes that negotiations will continue. Mikhail Saakashvili himself, the embattled President of Georgia, in an interview in Brussels covered by the Wall Street Journal, acknowledged that talks would have to continue, whether or not Russia had met the exact terms of the agreement for all Russian troops to withdraw. As long as the issue was not forgotten, then the situation would be acceptable for EU-Russia talks to re-start.

Russia has also not given an inch in regard to a continuation of the talks. It is the Russian position that issues in dealing with the Russo-Georgian conflict should simply not be on the table.

From the Russian point-of-view, life goes on. Talks which should have never been stopped will re-start. Russia will continue to do what it feels it needs to do to protect Russia and all her allies, big and small, and Georgia's two hardened secessionist regions will remain separate for the indefinite future.