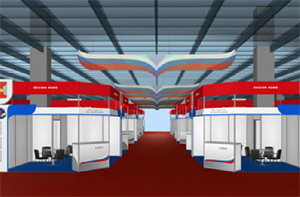 The Russian National Exhibition, to be held in India on November 25-28, 2008, will focus on increasing the bilateral trade between two countries

Russia and India are the most perspective partners for each other, especially in the field of economic cooperation. Though it develops rapidly, there are a lot of unresolved problems and unused potential.

Russia and India show mutual interest in realisation of some perspective projects, such as building of additional power units on the atomic power station in Kudankulam, and also atomic power stations under the Russian projects on new platforms, granting to the Indian side access to navigating signals of GLONASS, the joint satellite project "UtSat", and other industrial and technologic projects. According to orders of the Government of the Russian Federation and the Control list of priority problems on the further advancement of the Russian-Indian strategic partnership, confirmed during the meeting in Moscow of the President of the Russian Federation and the Prime Minister of Republic of India, is provided creation of the joint Russian-Indian enterprise for manufacture dioxide titan and other titan products in India in the state of Orissa.

In the field of ferrous metallurgy, sides express interest in the further escalating of the Russian-Indian cooperation in expansion of metallurgical capacities in India within the accepted by the Government of the India Program of increase in steel manufacture which assumes both building of the new metallurgical enterprises, and modernisation of the existing. The big prospects have cooperation of Russia and India in chemical and pharmaceutical sphere.

The general geopolitical and strategic interests throughout decades were a strong basis for close cooperation of two countries in all areas. It is important that today the Russian-Indian partnership has got powerful public support.

One of noticeable events in this area is the Russian National Exhibition. About 300 enterprises from 21 regions will place the expositions in the Expo Centre EXPO XXI.

The Exhibition will be organised within the Year of Russia in India and it urges to promote the further development of trade and economic relations, cooperation expansion in scientific and technical sphere, strengthening of two countries' business and cultural contacts.

Carrying out of such action, undoubtedly, becomes the important step to escalating Russia and India cooperation in investment sphere and area of high technologies, in fuel and energy sphere and military-technical cooperation, space sector and aircraft engineering, information technology and communication.

The political weight of Russia grows constantly, and will grow further. Exhibition activity in any country is the most powerful tool of economic and social development. The main mission of the All-Russian Exhibition Centre is an exhibition activity which solves such state problems as attraction of investments, formation of the country's image, sciences commercialisation and support of small and medium businesses.

Today, the All-Russian Exhibition Centre is the largest exhibition company in Russia and annually organises more than 50 exhibitions. Among the most known are "Flowers", "Golden Autumn", "Lift-Expo", "Day of Field" in regions of Russia, "Moscow International Salon of Innovations and Investments", All-Russian Forum "Educational Environment", "All-Russian Exhibition of Scientific and Technical Projects of the Youth NTTM", etc.

One of the striking forms of Russia representation abroad are the Russian National Exhibitions.

Within the exposition, as a rule, are shown not only new technologies and developments, exported production, but also in various forms the image of Russia - the country with stably developing economy possessing both intellectual and human potential and resources for socially focused state development, decision of strategic problems within the limits of national projects and programs.

The All-Russian Exhibition Centre is traditionally the operator of the Russian National Exhibitions, and also the Russian and Moscow expositions represented at the largest foreign international exhibitions: in 2004 - in Canada and Kazakhstan; in 2005 - Belarus, Tajikistan, Armenia and Germany; in 2006 - Azerbaijan, Germany, France, China; in 2007 - in Slovakia, Germany, France, Uzbekistan, in 2008 - Bulgaria, India.

The Russian National Exhibition in India will be held on November 25-28 in Expo Centre EXPO XXI (The Great Noida).

We hope that the Indian National Exhibition, which is planned to be carried out in 2009 in Moscow within the Year of India in Russia, will take place at the All-Russia Exhibition Centre.

We invite all of you to visit the exhibition and find new partners from Russia!