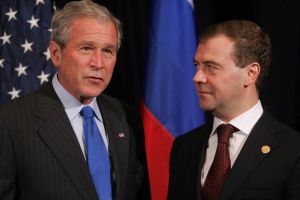 Bush told Medvedev that he had worked hard to make it a "cordial relationship" despite difficult disagreements. The meeting came at an Asia-Pacific Economic Community summit in Peru, part of a Latin American tour by Medvedev expected to lead to the negotiation of a number of business agreements with South American and Caribbean nations.

The meeting with Bush came against a backdrop of chilly U.S.-Russian relations following Moscow's war with Georgia in August and Washington's agreement to base a missile-defense system in Eastern Europe.

"It's an interesting moment because I've had a lot of meetings with Dmitry and Vladimir Putin," said Bush, who once famously told reporters that he had gotten a sense of Putin's soul. "This will be my last meeting as the sitting president with the leader of Russia."

"We've had our agreements. We have had our disagreements. I've tried to work hard to make it a cordial relationship so when we need to work together we can, and when we disagree we're able to do so in a way that is respectful to our two nations," he said.

Medvedev, who shook hands with the U.S. president in a flag-draped hallway on the waterfront Marriott Hotel, agreed that the two sides had kept lines of communication open.

"Generally, despite the existence of points in which we strongly differ, we have worked well and will continue this work," the Russian leader said.

Bush and Medvedev discussed a range of topics, from the Georgia conflict and missile defense to Iran's nuclear program, officials for the two sides said. They agreed to explore a joint strategy toward the recent bout of piracy off the Horn of Africa.

"The meeting went in a very good atmosphere, with both leaders understanding the importance of relations between the two countries," Russian Foreign Minister Sergei Lavrov told reporters. "There was a clear desire not to get obsessed with differences."

In a meeting Saturday with the leader of another nation with which Russia has had differences, Japanese Prime Minister Taro Aso told Medvedev that he would like to see an end to a territorial dispute that has soured bilateral ties since the end of World War II.

The dispute over the territories, known as the Kuril Islands in Russia and the Northern Territories in Japan, has prevented the two states from signing a formal peace treaty since the war ended.

"The problem remains an element which destabilizes the situation in the region," Aso told Medvedev at the start of their meeting at the forum.

Looking ahead to the rest of the Latin American visit, the deputy head of Gazprom, Alexander Medvedev, said the president would discuss the creation of a joint consortium to further develop the Orinoco oil field during a visit to Caracas, Venezuela, on Wednesday.

"The consortium will be the main theme [of energy talks in Caracas]," Alexander Medvedev told reporters on the sidelines of the APEC summit.

"We hope certain agreements on this will be reached."

The consortium has been discussed by five Russian energy companies — Gazprom, Rosneft, Lukoil, TNK-BP and Surgut — and Venezuela's state oil company PDVSA. But some analysts have said the recent plunge in oil prices could make it less lucrative.

Alexander Medvedev said the final decision on creating the consortium would follow the signing of an intergovernmental agreement between Russia and Venezuela, which is now in works. He gave no details.

Watch more on the topic: