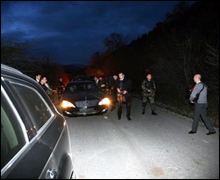 Tbilisi says machine-gun fire was heard as the cars of Mikhail Saakashvili and his guest Lech Kaczynski approached the checkpoint. Russia has called these claims a provocation.

After celebrating the fifth anniversary of Georgia's Rose Revolution, the country's president Mikhail Saakashvili took his guest and long-time ally, Polish president Lech Kaczynski, on a tour near the war-ravaged region of South Ossetia.

Shortly afterwards, the Georgian leadership says its convoy was `fired upon' by Russian soldiers.

The Polish president claims he didn't see anything because it was dark but believes he did hear something.

Kaczynski said: "A group of armed men have opened fire from machine guns some 30 seconds after we got out of out cars. Probably they were shooting in the air but I cannot fully assess that because it was very dark and we were about 30 meters away."

After his return to Warsaw, President Kaczynski said that nobody but him should be blamed for the incident, because it was he who asked to change the route of the convoy. It was originally planned that he would only visit Tbilisi, but the Polish leader decided that he should also inspect the refugee camp near the South Ossetian border.

"The risk was necessary. These are the obligations of the President of Poland. Everything that happened in Georgia happened under my agreement. I was not afraid," he said.

However, another Polish official, who witnessed the incident, Prime Minister Mikhail Kaminski, saw something a bit different from Kaczynski.

"When we reached the Russian patrol, we heard gunshots from their side. There were at least three series of carbine shots, but the President stayed calm," Mikhail Kaminski said.

"I can't say for sure whether they shooting into the air or aiming at us, but it's obvious that they came from the Russian side," he added.

Meanwhile, a Polish Foreign Ministry officially announced it does not possess any information that would confirm that Russian soldiers were shooting in immediate proximity to the Georgian president's motorcade.

South Ossetian authorities say the presidential cars tried to cross the border with the republic, but insist that no shots were fired.

Irina Gagloeva from the Committee for Information and the Press in South Ossetia said: "It is obvious that the South Ossetian bodyguards refused to let the motorcade pass through, having explained it was illegal. Nevertheless, some vehicle tried to drive through and even overturned a barrier. After that the motorcade made a turn and went back to Georgia. An officer on duty told us there were no rifle shots."

"The Georgian authorities organise it all themselves and then blame Ossetians and Russians. No shooting was carried out from our positions or the South Ossetian side. This is not the first time the Georgians have done this. The same happened in August when Saakashvili hid from an alleged Russian bomb," Lavrov said.

That refers to an incident in the town of Gori back in August, when the Georgian president took cover after he thought Russian jets were approaching.

Saakashvili was speaking to reporters next to his vehicle when one of his security personnel raised the alarm. Saakashvili was torn away by bodyguards and pushed to the ground. They piled extra flak jackets on top of him. Fearing an air raid other people fled, looking skyward and screaming. However, no jets were seen or heard.

Nevertheless, the Georgian media presented it to the world as a Russian attack.

"The leaders of Georgia decided that it was possible to solve the issue of the territorial integrity of the country by following the well-known principle of Stalin: "If there's a person, there's a problem. No person - no problem." They bombed and destroyed the houses of peaceful civilians. They killed people. It was a well-prepared, large-scale and indiscriminate act of aggression."

Roses are red, Georgia is blue

"Gori in ruins"? You decide