Speed in the blood 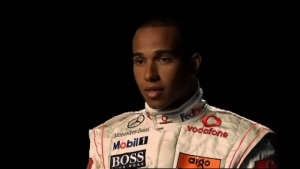 Sponsored by Exxon Mobil
Will there ever be a racing track built in Russia?
I hope so. I have been asked this question many times. It's my first visit to Russia and I've been to so many countries now. When I was a school boy, I looked at the map and thought it would be such a great country to visit. There have been lots of interesting changes over the last 5-10 years and I especially like the new architecture. It's my third day here but unfortunately I don't have enough time to go sightseeing, but I've got the impetus to come back. I hope that some day a Grand Prix will be organized in Russia.

Do you have any superstitions before a race? (i.e. do you always get in the car from the left side!)
I think everyone has something they do to get in the zone before a race but it is a personal thing which develops over the years. For me I like to go through the same routine every time I get in the car. To make sure everything is done, that my helmet and all my gear is completely ready, making sure nothing is new or different.

(On the Laureus Awards) Who of the previous winners do you most highly regard? Who is the sportsman you most admire (outside of Formula One)?
Firstly I'd say Tiger Woods. Also Roger Federer has won it four times and is a great star himself.

(On the Laureus Awards) Do awards outside Formula One wins give you more confidence in your racing?
Yes, I think the more fans you get the more support you get from your team and from all the companies, such as Mobil 1, you work for and represent. The more confidence and belief it gives you - you have a certain amount of belief in yourself but then with those awards it gives you a greater boost.

Can you give us an idea of your training programme?
We have fitness training and tests that we have to go through. The V02 Max test (an intensive test to fully exercise the body's aerobic energy system), is probably one of the hardest tests of the year. But for me, what's important is that I've had a fantastic season and the goal is obviously to win this year's Championship, not only the constructor's but also the driver's. For me to do that I've got to be fitter, I've got to be better and prepared mentally and physically and that also means understanding the car more, being more relaxed, making sure I analyse the data more and if I can be better prepared than I was this year when I approach those races, then we should do better.

Can you talk us through the pressures on your body when driving the car from pole position through the first corner and into the first straight (on your favourite or toughest circuit)
They always talk about G-Forces which people don't always particularly understand I think. G-Force is the amount of Gs you're pulling times your body weight, so if you're pulling 5 Gs, you're pulling five times your body weight and when we're breaking from 100-200 miles an hour, down to 50 miles an hour just after the 100 metre sign, the brakes are so good and because you're at high speed and have maximum downforce, your whole body wants to go forward, so its really important that you get your core stability. It's not about bulking yourself up or having big muscles it's just about having endurance. You need your strength because the steering is quite heavy, even though we have power steering and when you're going through corners at 120-150 miles per hour, your body wants to go one way and the car's going the other way, it's almost like it's on rails so you're just trying to hang in there with the car and the force is on your arms, on your shoulders, your core, your legs and most importantly your neck - your head just wants to fall off your shoulders

What are the toughest technological demands this year & how does a superior lube such a Mobil 1 help with that?
When you watch Formula One you watch the driver and his car but attention to detail is essential too. Vodafone McLaren Mercedes does its best to improve the quality of car and that's why reliability is very important. Every year expectations become higher, regulations become harder, and we are trying to extract the maximum power from our Mercedes-Benz engines, which is why the partnership with Mobil 1 is fundamental to the team's success. We're working hard to improve dynamics and in turn drive faster every year. With the implementation of new regulations, lubricants play an increasingly considerable role in increasing engine power, lowering wear and damage to the engine.

How do you relax when you're not driving?
I play a guitar. I brought my guitar with me here to the hotel room in Russia so I can play a little bit of music or listen to some Bob Marley. I like to sit and talk to my brother or we play computer games, but that can actually be more stressful because he beats me and I don't like that!

Who or what do you trust most in your life?
Mostly I trust my family and myself. When I sit in a racing car, I trust my feelings and the decisions I make. Every driver should be self-confident and think that he is the best. The only thing you should do is to believe. When you have challenges, you and your family can always help you.

How did you get on at school?
I was a good pupil and I tried hard but I had to miss school for races every Thursday. In my early years I had to make a decision about my future career and though my mates had free time at the weekends, they didn't have the same sporting aims or ambitions. It was good for me to have a target at such an early age and at age six I'd already made my decision about what I wanted to do with my life.
I have had support and I had a tutor who helped me to learn. I appreciated his help very much. I always wanted to go to university and though I haven't lived as a student and I missed out a lot on my childhood, you have to make some concession to do this and I don't regret anything

What was the most memorable race in last season? Did you learn anything useful from the 2007 season?
I think it's Montréal, which was the first Grand Prix I won. I absolutely didn't expect it and it was remarkable. When you aim to win and find yourself on the podium, you then start looking forward to what's next. Maybe it was a good luck, but it proved we were working efficiently.

Formula One is a partnership of the racing team, technical engineers and Mobil 1 engineers. That's not a commercial partnership, but a technological collaboration. The question is what sort of partnership is this? What are your team's strongest attributes?
We work very closely together and a driver should notice everything, so I pay close attention and I realise that the things Mobil 1 does for our team are very important. In previous seasons we helped in testing lubricants and therefore contributed to an improvement of the lubricant's formula. Every year they improve the product and after seven or eight years working in this industry, 2007 was the most efficient so far.

What car do you drive away from the race track?
People expect me to drive very fast because I'm a Formula One driver and I have a very fast car. But I've got a seven-seat Mercedes Benz GL with a 2.4 liter diesel engine. People always laugh, but I care about safety on the road and other people's safety. I like to switch on some music, settle down comfortably in my car and just drive.

Describe how you felt about your last race.
That was a very hard and long season. I was preparing very carefully for the last race; some people were expecting considerable results from me. Some people didn't expect anything. At the end I was just one point less than Kimi Raikonnen, who is an outstanding driver and I think it was a good result. I'm glad that I had an opportunity to work with such a good team and next season I'll do my best to improve my results.
Watch a short film about Lewis Hamilton: