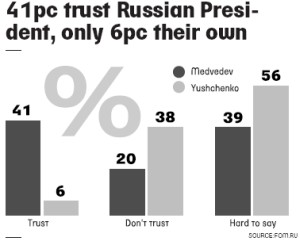 Four years ago, the Western media celebrated the victory of Viktor Yushchenko in the long-drawn out Ukrainian presidential elections as the dawn of a new age of prosperity and democracy in the country.

Western strategists saw the so-called Orange Revolution in Ukraine as confirming the trend of Georgia's Rose Revolution in 2003 for former Soviet republics to seek integration in Western structures like NATO and the EU to the exclusion of Russia.

Although they condemned nationalism as backward-looking in their own societies, in 2004, many Western commentators presented the Orange revolutionaries' Ukrainian nationalism as a positive force. It was supposed to be the engine for Ukrainian progress towards the Western global model.

Today, Ukraine's economy is in deep crisis. Integration with the West has brought recession leaving steel mills and coal mines idle and wages unpaid. As the credit crunch and economic downturn in the West sours even American faith in the blessings of unbridled globalism, all that remains of the Orange project in Ukraine is nationalism. But nationalism in a time of economic crisis is a very rancid ideology.

Even before the current crisis, the Orange revolutionaries of 2004 had fallen out over how to divide the spoils of office and how far to sacrifice the national interest to NATO membership.

The bitter personal rivalry between President and his prime minister, Yulia Timoshenko - the key Orange revolutionaries in 2004 - also reflects a deep divide over Ukraine's future economic and strategic orientation.

As Ukrainian industry grinds to a halt, the country's quarrelling former Orange revolutionaries face a brutal choice. Should they put ideological purity first and pursue the mirage of Western integration for a poverty-stricken population regardless of the Ukrainian people's wishes, or should they put their country's economic well-being first?

Timoshenko is accused of populism by the President's media backers. And it is true that the Ukrainian prime minister has curried support with the voters by backing economic and social measures which help them. But in a democracy it is usually the candidate with populist policies who wins most votes. As ex-National Bank chief, Yushchenko gives the impression that the key voters in his version of Ukrainian democracy are bankers and oligarchs. Maybe they are, but that is not the democracy promised by the Orange revolutionaries in 2004.

With early parliamentary elections looming, to be followed by presidential polls next year, President Yushchenko's popularity has sunk to the single digits. Other post-Soviet presidents have bounced back from such unpopular levels, but hardly by using model democratic means. In 1996, for instance, Boris Yeltsin's backers in the new Russian oligarch class used their media monopoly to re-elect Yeltsin despite the deep poverty of most Russians then by playing up the fear of a Communist comeback.

Today in Ukraine, Yushchenko is trying to play the same game. Using anti-Russian nationalism he has tried to rally the Ukrainian speakers to his side. He tried to cut off access to Russian television channels, popular with Ukrainian as well as Russian-speakers so that only nationalist voices would be heard. Ironically in order to create the kind of slick modern nationalist propaganda, Yushchenko's supporters have had to import expert propagandists from Russia!

Russian journalists who worked for media oligarchs like Boris Berezovsky and Gusinsky in 1996to boost Yeltsin are now in Kiev to revitalise Yushchenko's popular image.

Things were very different then. In 1996 the grim Soviet past was still tangible in Russia. Yeltsin's propagandists could play on the reality that his only alternative was the unrepentant Communist, Zyuganov. In Ukraine, twelve years later, even with a media monopoly, Yushchenko would face a very different scenario. His main political rivals made their careers after 1991 and have fewer connections with the old nomenklatura than he has. Having built up Yulia Timoshenko as the heroine of an independent post-Communist Ukraine during the Orange revolution in 2004, Yushchenko cannot discredit her patriotic credentials without undermining the Orange myth which is the basis of his own rise to the presidency.

Worse still Yushchenko's failure to clarify how he came to be so disfigured in September, 2004, has come back to haunt his credibility. Then his poisoning was widely claimed to be a sinister Russian plot, but now ex-ministers like David Zhvania suggest it was food poisoning not a criminal act that made Yushchenko's pock-marked face the image of the Orange Revolution and gained him enormous sympathy.

Yushchenko's personal political crisis comes from presiding over an economic crisis compounded by his naive acceptance of every Western consultants' self-interested advice. Then he has added attempts at media control by decree to deny the problems, which has compounded his failure to live up to his promise of a new openness in government.

The Western media, including Western-sponsored outlets in Ukraine present attempts to block Russian television not as censorship but as a blow for Ukrainian independence! What viewers in Ukraine is ignored so long as NATO's geo-political interests are served. American government-funded stations like Voice of America and Radio Liberty are allowed to broadcast independent news on Ukrainian channels but not Russian stations.

Under the guise of promoting a free media market in countries like Ukraine Western taxpayers fund propaganda not only against other countries like Russia but also on behalf of one candidate in the country's political spectrum. Something illegal in the United States itself.

As the economic model promoted by Viktor Yushchenko and his Western sponsors wallows in depression, Ukrainians may ask whether the Orange Revolution marked the rebirth of their country or the last gasp of ideologically-driven politicians. After all, for seven decades Kiev's political class followed the Kremlin's lead blindly. Under Yushchenko it was the White House which laid down the ideological path for Kiev to follow. The coming months will decide whether

Ukrainians will finally break the shackles imposed by dogmatic models - Communist before 1991 and so-called capitalist since 2004. Electing politicians who put Ukrainians' rational economic interests ahead of ideology or foreign sponsors' geo-political ambitions will be a huge step forward for Ukraine's well-being. But will such politicians get access to Ukrainian media?

Mark Almond is a Lecturer in History at Oriel College, Oxford, and a Visiting Professor in International Relations at Bilkent University, Ankara.