Army reforms show Nato no longer seen as a threat 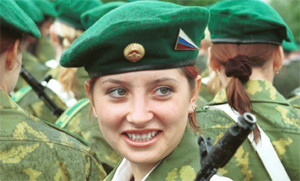 Fewer soldiers for a sleeker army

Every year, the Russian Defence Ministry holds a conference attended by generals and the President. It's from this conference that the rest of the country learns about any new military reforms and weapons programmes.

This year's meeting, on November 11 was unlike any other. First, President Dmitry Medvedev did not attend. Second, there was conspicuously little information released.

The only thing we do know - from a terse document released by the Defence Ministry released - is that the number of army officers will be reduced by 205,000 to 150,000 and the number of military educational institutions will be cut by 80pc. In addition, the ministry announced that the elite Tamanskaya and Kantemirovskaya divisions as well as the 98th and 106th Airborne Divisions are scheduled to be disbanded in 2009.

The cardinal changes planned over the next three years are causing several hundred thousand military personnel to shake in their army boots. Back in Soviet times, the top brass would certainly have used its own media outlets to "explain" their strategy to the public. Of course, 80pc of those plans consisted of little more than senseless jabber, but at least in this way rank and file soldiers had some idea of what awaited them.

It is not surprising that the military's top brass has resisted the plan to institute huge cutbacks to the armed forces. And it will take some time before they can be sure that the would-be reformers have adequate political support to implement their planned changes. While that internal struggle plays out, the defence minister and President apparently prefer to remain quiet.

But there is a more important reason for their silence. The proposed cuts and reorganisation are so significant that they will cause dramatic changes to not only the quantity but also the quality of the armed forces. I have argued in the past that a large reduction in the officer corps and the creation of a professional army effectively means the end of the mass mobilisation army.

The head of the general staff, Nikolai Makarov, and lawmakers from the Duma and Federation Council have only recently learnt of the reductions. There should now be only 1.7 million military personnel during wartime. In the event of a war, only 700,000 soldiers will be called to service instead of mobilising several million reservists.

This means that the country no longer requires a huge pool of reservists. It also eliminates the need for conscription.

The authorities have apparently decided that they will either make drastic cutbacks to the conscription numbers in 2012 or eliminate conscription altogether. Which way will it go? Makarov gave us a clue when he recently said on television: "In 2012, 2013 and 2014 there will be a significant drop in demographics... Our conscription pool is now only one-half of what it was in 2001.

"But we hope to double or triple the salaries of professional military personnel by that time to attract contract soldiers on that preferential basis and to put an end to that question."

I suspect that the authorities would win the support of the people if they were to implement such a revolutionary reform. The fact that the leaders remain silent does little to mask the enormous commotion caused by these changes. As soon as the authorities begin to speak openly about a new military strategy and reorganisation, it will be clear that it does not jibe with the aggressive rhetoric that we have heard so much from so many generals, as well as Medvedev and Prime Minister Vladimir Putin.

The rejection of a mass mobilisation army would essentially mean that the country's leaders for all intents and purposes have acknowledged that Russia is fundamentally unable to counter Nato and "the US aggressors".

This also means that the only deterrent left for the country is its nuclear forces. As a result, the bar has been lowered for when nuclear weapons might be used. But this issue is largely academic since no one seriously believes that the Kremlin is ready or willing to launch a nuclear strike.

Judging by the planned military reforms, it is clear that the top brass in their do not seriously consider the US and Nato as serious threats to Russia's security. But the leaders in the Kremlin and the Defence Ministry are not ready to admit it publicly, which is why they remain silent about the reforms.