A distinct smell of gas 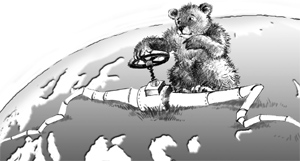 During the previous summit in June, Russia and the EU agreed to start talks on a new partnership and cooperation agreement. But in early September the EU suspended the talks because of Russia's role in the Georgian-Ossetian conflict.

The suspension has not affected Russia, and now Europe has decided to start negotiations on a new agreement, to replace the one that expired last December.

But the stakes, above all the gas stakes, have been raised. The wind in Nice carried a distinct smell of gas, with nuances of oil, coal and electricity. In short, Russian-EU cooperation reeks of energy irrespective of the summit's agenda.

President Dmitry Medvedev spoke about a new system of European security, but it was not at the top of the agenda because it was only a loose idea. Moreover, no discussion of European or Euro-Atlantic security systems is possible without the US. French President Nicolas Sarkozy welcomed a number of Medvedev's proposals, in particular for a European security conference in 2009.

However, the focus before and during the Nice summit was on energy. Prime Minister Vladimir Putin, after talks with his Finnish counterpart, Matti Vanhanen, said two days before Nice: "Europe should decide whether it needs a gas pipeline [Nord Stream] from Russia at the proposed capacity or not. If it is not needed, then we will not build the pipeline, we will build gas liquefaction plants and send [liquefied gas] to world markets."

Nord Stream, estimated at 7.4bn euros, is to be completed in 2011, but its price will grow in view of the financial crisis.

The plan outlines six key goals, including the improbable "blueprint for a North Sea offshore grid, interconnecting national electricity grids and plugging in planned offshore wind projects". EU experts say that Atlantic winds might suffice, but not the capability to harness them.

The European Commission plans to spend two trillion euros on the Energy Security and Solidarity Action Plan, which will be difficult but not impossible despite current financial problems.

Three of the six objectives were apparently designed for Russia. They include:

o Completion of a Mediterranean energy ring, linking Europe with the southern Mediterranean through electricity and gas interconnections to improve energy security and help develop solar and wind energy potential;

The Southern Gas Corridor stipulates building the Nabucco pipeline along the bed of the Caspian Sea to pump up to 30bn cubic metres of natural gas from Turkmenistan, Kazakhstan and Azerbaijan to Austria via Azerbaijan, Turkey and the Balkans.

On December 2, the European Commission will start the procedure for approving an interim trade agreement with Turkmenistan, allowing it to buy natural gas directly.

Next year Brussels intends to form a Caspian Development Corporation (CDC) of five or six European companies that will purchase, transport and market natural gas from the Caspian basin and develop a supplies infrastructure. The goal is to use CDC to increase natural gas acquisitions to 60-120bn cubic metres annually, or 12pc-25pc of EU gas requirements.

According to the European Commission, EU countries import 42pc of their natural gas requirements, a third of their oil and 25pc of their coal from Russia. By 2030, Europe will depend almost entirely on imported gas, with gas imports growing to 84pc from 61pc.

The EU seems ready to invite Russia to use the planned Caspian pipeline, although it has not outlined the terms. But Russia thinks the pipeline will be unprofitable as it was prompted not by economic but by political considerations.

The Energy Security and Solidarity Action Plan is indicative. Europe needs a new PCA with Russia to regulate energy relations, in particular the amount and terms of buying, shipping and marketing gas, oil and electricity. The old PCA had no such provisions.

Clearly, gas from Libya would be much more expensive than from Russia, while Turkmenistan has agreements with Russia to deliver its gas through Gazprom's pipelines. Hints that Europe may do without Russian gas don't convince.