Government action could be basis for secure economical future 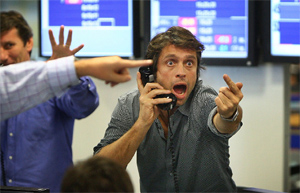 For the first time in years, Russians overwhelmingly endorse the action of their Government, in this case in its reaction to the financial crisis. Everyone understands that inflation will not be fully overcome, but believes there will be no default, and the outlook is not all that bad.

The first top-level decision was to do everything to prevent a panic and to start distributing money to shore up the market and sustain some companies.

Since mid-September, the Government has been making weekly contributions to an anti-crisis chest. Because more than half of the support measures approved by the Government and the Central Bank are intended for the banking system, it's the banks who have been benefitting first, along with the process of consolidation started as a part of refreshing the banking system. The flip side, however, is that the business community now worries about a shrinking market, but all the measures were accepted as necessary steps.

Another consequence of the outflow of capital and programmes to support business will be the curtailment of investment plans. The first to be hit will be procurement of machines and equipment. That will reduce lending and slow down the growth of people's incomes, which in turn will slow demand for imported consumer goods.

Not only companies, but households will buy less next year. Exporters have been earning less. Meanwhile, the export of commodities to which the Russian economy is a hostage, provides a safety net. Among the winners can be commodity exporters.

Nor can one pin hopes on the appearance of a large quantity of new Russian producers, as happened in the 1990s There is no longer unused capacity, as was the case during the industrial slump of 1990s, which could be taken up by new production. That capacity has now either been reconstructed and taken up by manufacturing, or has become unusable. So, it was a necessity to find other financial solutions.

At the latest meeting of the FIAC in mid-October, Prime Minister Vladimir Putin called on investors to look at the actual opportunities and not at fluctuations on the stock market.

Western companies, chaired by Ernst & Young, did not challenge this prospect, but suggested that investment regulations be made more transparent and additional measures to protect investors be introduced.

At the same time strategic foreign partners have been somewhat sluggish in the current conditions: it is now clear that business plans made on the assumption of rapid growth of real incomes will have to be revised. But nobody is going to leave.

As the executive director of the Moscow Raceway, Hans Geist, said: "You have to redesign your organisation and your strategy. But it is necessary to mention that Russia will be a strong and interesting market for the future. The crisis will help to establish proper rules for the financial market and to clean up some administrative nonsense."

In fact many experts are convinced that the Russian crisis will be a blessing in disguise. Yes, belts will have to be tightened, but this can be seen as a sobering up process after the petrodollar-driven euphoria of recent years.

How does the crisis affect ordinary Russians? Igor Shatrov, president of the Livadia Club, says that the first wave of the crisis, the slump of share prices of domestic companies, has not affected the population because the majority of Russians do not own securities.

However, most people expect inflation to keep rising. High-income groups will grow still richer because the crisis for them it is an opportunity to buy property and land. As for the middle class, the upper-middle class who have already experienced ups and downs in the past, have mostly created a safety cushion. The situation with the working class is different. Only 10pc of the them are thought to have savings.

The crisis is already affecting the labour market. Massive layoffs of personnel are expected, but not really critical. The curtailment of lending programmes will put producers on the brink of bankruptcy; forcing the employees of these enterprises to reconsider their career plans. In the industrial sectors the personnel of building companies and building and finishing materials enterprises are most at risk, especially those in the housing construction - one of the biggest "bubbles" of the Russian economy.

What Russians are really worried about is their bank deposits. In order to avoid the panic the authorities have pledged considerable funds to support key lending and financial institutions.

All these measures has led to the public opinion that the situation is under control.

Yes, inflation will not be fully overcome. Yes, prices are likely to grow faster than the interest on bank deposits. But there will be no default and the whole outlook is not all that bad.