Soft leadership. Is it achievable? 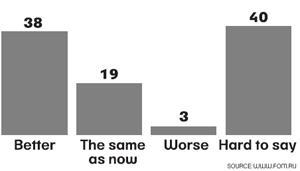 Russia-US relations with Obama will be...

After Barack Obama's convincing victory in the presidential election, some people in the US have already dubbed him a conservative. But that is by no means the same thing as calling him a Republican.

The world is changing and will continue to change, but it would be wrong to expect this to be a rapid and simple process. Obama is thought to be aware of this and is expected to design his domestic and foreign policies accordingly. He will have to convince the world that America is changing as well and simultaneously demonstrate that he will uphold the interests of the US without provoking universal resentment. In other words, Obama will have to work within a framework of several objective limitations.

First, he has four priorities: speedy liquidation of the financial crisis with minimum harm to the US economy and winding up the Iraq campaign; and the medium-term challenges of healthcare reform plan he spoke about during his campaign, and cutting the federal budget deficit.

Obama will have to meet the expectations of the outside world. He is expected to initiate a substantial transformation of US foreign policy, with elements of British flexibility, Chinese caution and American drive. Simultaneously, he is seen as being a trans-cultural cosmopolitan. He is perceived as a citizen of the world and not as a leader temporarily elected by his constituency to the world's most powerful job.

These expectations are partially mutually exclusive because they imply different sets of instruments, actions and alliances. It is still too early to speak about the shape of Obama's foreign policy. First, the key administration figures responsible for naming priorities and for foreign policy in general, have not all been named. Second, judging by past experience, the early months of the new President's incumbency usually see something happening on the world stage to which the US administration reacts and thus determines the character of its foreign policy in the following years.

The Nato summit in April may provide such a pointer. It may clarify the foundations of US-EU relations: the approach to collective security; the international community's engagement in such countries as Afghanistan; America's position on the expansion of the Alliance to the territories of the post-Soviet Union; and the deployment of a missile defence system in Eastern Europe.

What can be said with some degree of certainty is that Obama will have to take difficult decisions on Iraq. No matter what the President ends up doing - instigating a quick withdrawal or a smooth transition - Obama's decisions will have long-term consequences for the US and the world.

Then there is Iran. No miracles are to be expected there. Discussions are one thing but negotiations are very different. The options are limited: the use of force or maximum engagement with Iraq in the global framework. Perhaps the best that can be done is to make sure that Iran stands to gain nothing from confrontation with the rest of the world, either economically or politically. Finally, there is the settlement of the Israeli-Palestinian conflict to which Great Britain attaches great importance, but from which nobody realistically expects significant progress.

Pakistan, where the situation is increasingly worrisome, may become another important area for Obama to show decisive leadership.

In all the above mentioned areas, the European Union is expected to be actively involved. That in turn calls for the restoration of not simply of a good, but of a working relationship between the US and the EU. Is this possible? Up to a point. The relations between countries, alliances and blocs can be based on three principles: mutual trust, inevitable coexistence and mutual benefit. Russian-British relations are governed by both the need to coexist and mutual benefit. Their relations have an economic basis which has kept the two countries from taking drastic unilateral actions at times of political tensions.

As for Russian-US relations; they are not based on trust, coexistence or mutual benefit. They are global in character, and include consideration of issues such as non-proliferation, counterterrorism, arms control and climate change. Looking at cooperation in other fields, the conventional wisdom is that non-involvement can be more negative than engagement in solving a problem. Perhaps this will determine the nature of future Russian-American agenda on such issues as Iran, North Korea and the Middle East.

Russia is used to acting with the United States in mind: Russia cannot get away from the traditional global rivalry. But rivalry is not confrontation. Whether Russia will treat the US as a rival or as an enemy depends not only on Moscow, but on the new US administration. Obama is expected to use a softer toolkit in foreign policy than the Republicans. But in every specific case there will still be winners and losers, those who are pleased and those who are disappointed.