Switzerland of the East? 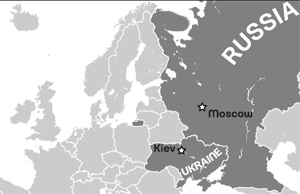 As Russia and the West man the trenches over Ukraine's possible membership of Nato, nobody has suggested pushing against one of the emergency exits called "Ukrainian neutrality".

Admittedly, against the backdrop of bloated military budgets, and the threat of Osama bin Laden behind every rock, the idea may sound preposterous, if not outright dangerous. But Ukraine, by adopting a neutral position, has everything to gain. Ukraine should say no to Nato, and nyet to Russia, and declare itself the Switzerland of Eastern Europe.

First, Ukraine and Russia share more than just a lengthy border. Russian statehood emerged many centuries ago from Kievan Rus, the first East Slavic state, as did Belarus and Ukraine. Although a shared history does not necessarily mean civilised neighbours, or a shared foreign policy, it also does not mean that history should be casually swept under the carpet and forgotten.

The USA, which spends more on military hardware than all the Nato members combined, could not prevent a handful of radicals from breaching its borders and hijacking four commercial jets. In fact, the very strength of the US, a nation that has a dangerously reflexive Middle East foreign policy, makes it a very attractive target. Should Ukraine join Nato, then America's assorted enemies will suddenly view Ukraine as an enemy as well. Does Kiev really need the hassle?

Today, Washington's political pundits are busy scrawling deluded articles that foresee Russia's "latent imperialism" and "oil muscles" as a grave threat to Ukraine's independence. This proves that sometimes reality is not stranger than fiction. History shows that Ukraine and Russia enjoy cool yet cordial relations.

The best example of this mutual trust emerged shortly after the collapse of the Soviet Union when Ukraine suddenly found itself in possession of a lot of nuclear weapons. At Moscow's behest, Kiev surrendered its radioactive stockpile without any fear of tipping the nuclear scales, or compromising its national security. Without an atmosphere of trust between the bordering countries such an event would have been impossible.

What Ukraine stands to gain from balanced, bilateral relations with both the West and Russia is inestimable. But if Kiev should decide to throw in its lot with only Nato, the EU and Washington, it will severely limit its foreign policy options.

Ukraine's unique geopolitical position - directly on the fault line between East and West - demands that the area be given special status. For any one country organisation to control this "pivotal" space on the geopolitical chessboard would invite an Arms Race in capital letters.

Yet Western politicians and commentators myopically view Ukraine's choices as simply between the West and Russia, as if Ukraine has no other options.

Zbigniew Brzezinski, the American geopolitical guru, is even guilty of oversimplifying Kiev's choices in its relations between Russian and the West.

"So, it's a realistic goal [Ukraine's assimilation into Western institutions]," Brzezinski told VOA Ukraine last year, "but it will take a number of years of patient negotiations, of structural changes, reforms in Ukraine, but more and more Ukrainians... know that Ukraine's future is in Europe and not as a periphery of Russia."

Certainly Brzezinski, who authored the highly provocative book The Grand Chessboard, understands enough geography to know that Ukraine would sit in Nato's "periphery", as opposed to Russia's, if it opts for membership in the Soviet-era organisation. Is that any better of a position to be in?

Finally, bringing Ukraine into the Nato fold at the same time Poland and the Czech Republic gave the US a green light on the construction of an anti-missile system on their territories is asking too much from any country. Would the US turn a blind eye if Russia were to begin construction of an anti-missile system in Venezuela? The cure, from Washington's perspective, would seem every bit as deadly as the disease. Moscow has every right to fear the same consequences.

Neutrality is not a cowardly choice. Switzerland maintains a militia-style army, with about 300,000 men and women. All able-bodied males between 19 and 30 are required to serve their country for two years. Men have to keep an army-issue assault rifle at home, together with government-issued ammunition.

If Ukraine becomes the latest Nato franchise, it will be forced to spend a lot of funds on new (US-made) military hardware. However, if Kiev declared its neutrality, it could invest that money into education and business growth.

Better that than Nato boot camp, or mending fences with Russia.

Robert Bridge is editor-in-chief of the Moscow News weekly newspaper.