Assessing the shelf life of a President 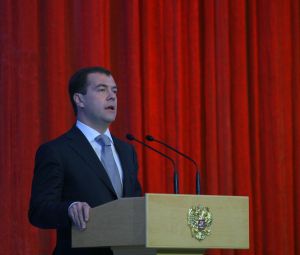 The lower house of parliament gave its final approval to a bill extending the presidential term from four to six years. If enacted, the change would not apply to President Dmitry Medvedev current term, due to end in 2012.

It is not entirely clear why the issue was raised now. At a time of increasing financial instability, the question of presidential terms could have easily been put on the backburner - unless Medvedev has plans to resign soon.

But the issue of what is the optimal presidential term provides an opportunity to ask how long most leaders can rule before they lose their leadership skills.

During the last 50 years of Russian history, only four people have ruled for extended terms - Soviet leaders Nikita Khrushchev and Leonid Brezhnev, and Presidents Boris Yeltsin and Vladimir Putin. The rest, including Soviet leader Mikhail Gorbachev, held power for much shorter periods. But if we look at the activities of the four leaders who stayed in their posts the longest, we see a curious pattern. Within five or years of coming to power, they lost their motivation, energy, innovation and the ability and willingness to consider the opinions of others.

Khrushchev ruled from 1953 to 1964. His worst character traits - tyranny, megalomania and a propensity for making rash, arbitrary and incompetent decisions - began appearing in the late 1950s and early 1960s. The result was an increasing number of problems and mistakes, from food shortages to the Cuban missile crisis.

Brezhnev, who led the Soviet Union from 1964 to 1982, lost whatever scant leadership abilities he had in the early 1970s. The final 10 years of his 18-year rule went down in history as the period of Soviet stagnation. Yeltsin served from 1991 to 1999. His first presidential term was not very successful, and his second is widely considered to have been catastrophic.

Finally, most of Putin's reforms were implemented during his first presidential term. His second term was marked by a slowdown in reforms, a sharp increase in both bureaucracy and corruption and worsening relations with the West.

Comparing such diverse epochs and dissimilar leaders may be flawed, and historians might rightfully consider this analysis superficial and inaccurate. Nevertheless, one general conclusion is clear: Russian leaders - and their advisers - are productive, innovative and efficient for no more than five or six years. After that, they become detached from the real problems facing the country, corruption flourishes and the economy declines into stagnation and then crisis.

Although this phenomenon may be more pronounced in Russia, it is seen in mature democracies as well. Great leaders in the West also try to exceed the limits placed on them by historical circumstances, and the results are usually negative. For example, Winston Churchill's second term as British Prime Minister was less triumphant than his first, and Charles de Gaulle's presidency in France took on an almost comical turn in the mid-1960s.

Of course, the first temptation is to attribute the drop in a leader's abilities to his age. But old age and health are probably not the only factors. Each leader has his own particular mission in history. Churchill's mission was to achieve victory in World War II and de Gaulle's was to found the French Fifth Republic. The same was true for every Kremlin leader. After his mission has been completed, if the ageing leader continues to cling to power, he quickly loses his former greatness and becomes a parody of himself. Napoleon Bonaparte once said: "There is only one step from the sublime to the ridiculous." Toward the end of his brilliant career he fell victim to the same general law.

If this theory is right, then an amendment should be made to Medvedev's proposal. The presidential term could be extended to six years, but on the condition that each President serves only one term. This is the best way to ensure that there is always fresh air in the Kremlin corridors.

Andrei Kortunov is president of the New Eurasia Foundation in Moscow.