Letting them down gently 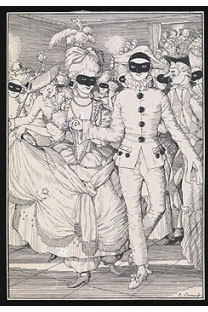 Russian Art Week, London's bi-annual auctioning bonanza of everything Russian from paintings and icons to antiquarian books, Fabergé jewelry and cavalry sabers, drew to a close on Thursday. From the auction houses who hosted it there was an almost audible sigh of relief; despite the harsh economic climate they escaped the collapse some doomsayers had predicted. In some cases sales well exceeded their estimates, and Sotheby's even posted an increase on its 2007 sales of Russian Art. But other results were far more mixed, and as a litmus test of wealthy Russian's willingness to open their wallets, the end result is not quite optimistic.

London's major auction houses (Christie's, Sotheby's and Bonham's being the most prominent, along with MacDougall Auctions, which focuses exclusively on the Russian art market) tend to coordinate their Russian art sales in an effort to lure as much of the market to London as possible. The event bolsters the image of London as the playground of Russia's super rich, but it is not a case of the auction houses following the market, but rather of attracting it. "Simply, we're not allowed to hold auctions in Russia," said a Christie's spokeswoman. "So it makes sense to hold our auctions at the same time to attract the maximum number of buyers." Holding auctions in the same week is as far as the cooperation goes, however. Beyond that the auction houses are in stiff competition for what is one of the richest art markets in the world.

"Ninety percent of buyers of Russian art and artifacts are Russians," said William MacDougall, Director of MacDougall Auctions, "but two thirds of all Russian Art is sold in London." That means that the auction houses make a lot of effort to woo potential buyers to London (often exhibiting highlights in Moscow in the run up to the sale). It also means that many commentators have seen this as a litmus test both for the Russian Art market, and of how wealthy Russians have been affected by the global financial crisis.

London's sales of Russian art are bi-annual, occurring in June and November. Like most art markets, because works are not constantly traded, that can make it difficult to predict how it will behave. MacDougall likens it to "a stock market that trades only twice a year: the principles are the same, but because you have fewer indicators it can be harder to predict."

Previous indicators had been promising. The round of auctions in June did well, consolidating Russian Art's reputation as one of the strongest markets around, "even outperforming Russian equities," according to MacDougall, who was an economist before he turned to art trading. That tempted many to bring high-value items to market this autumn, and things did indeed get off to a good start. On Monday, Sotheby's sale of Imperial and Royal Presents brought almost superlative results. Led by ever popular and dependable Fabergé items, including a heart-shaped photograph frame and a gold and enamel bell push, the collection of precious items brought in almost two million pounds, nearly doubling its pre-sale high estimate. At its evening sale of Russian Art the optimism continued, bringing in £15 million, just shy of the low estimate of 17,535,000. Jo Vickery, senior director and head of Sotheby's Russian Art Department, said that she was "very pleased."

But that optimism became harder to sustain as the week went on. Later results have been more mixed, and it has become clear that the art market, like most others, has taken a blow.

Auctioning is never a precise business, and there were naturally the disappointments and the surprising triumphs. "The Rag Market in Moscow," however, a monumental scene by Vladimir Makovsky that had spent most of the 20th century hanging in a shop in Copenhagen, set a new record for the artist at Sotheby's auction. MacDougall Auctions sold a collection of Konstantin Somov's original risqué ink drawings for "Le Livre de la Marquise" for over one million pounds. Meanwhile, some flagship items did not even sell. Sotheby's failed to shift a view of the Bosporus and Constantinople by 19th century Russian-Armenian artist Ivan Aivazovsky, and at Christie's a silver soup tureen in the shape of a 14-gun warship that was commissioned by Catherine the Great and described as "the most important and imaginative pieces of 18th century Russian secular silver to survive," also failed to find a buyer.

The auction houses are understandably reluctant to call time on the Russian market just yet. This week's results were more mixed than disastrous. "Eight new artist records were established and 30 percent of the buyers in the sale were not only new to Sotheby's, but from the CIS, which is extremely encouraging and demonstrates that there continues to be an active market for Russian Art," said Vickery of Monday's sale of Russian Art, even though it failed to make its low estimate.

Nonetheless, said MacDougall, the week has definitely been disappointing. "All of the auction houses have made less than they hoped for this week," he said. "It is now clear that the peak was in June. That is disappointing, but it is certainly not a catastrophe."

Just as the main beneficiary of the Russian Art boom was London, so will the slowdown be felt there more than in Moscow. But what does it say about the Russians who are the main customers?

MacDougall believes that the Russian Art market is still comparatively strong, given the economic downturn. "It has been affected less than, say, impressionist art," he said. That suggests that the benefits of being patronized by wealthy Russians have not yet evaporated; and, as Vickery pointed out, some new artists also did surprisingly well. "Given the strength we have seen for good pictures and objects this week, we expect to enjoy success going forward at a slightly recalibrated level," she concluded. But the future will be fragile, as reflected by the strong showing of safe bets like Fabergé antiques which, like jeans, can never go out of fashion. Bidders seem less willing to take risks. That is not a surprise, and it is not a crash. But it does represent the end of another of Russia's improbable booms.