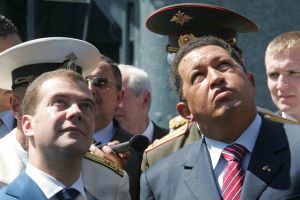 This spurred the optimism of Russia's experts on Latin America and everyone connected with it in the past decades. They did not expect any Russian leader to say what Medvedev has said in Cuba, although they had spent years reminding the Kremlin about the "Latin American comrades."

The Russian delegation has signed the largest number of agreements and memorandums ever, from traditional military and cultural contracts to multilevel agreements on nuclear power generation, joint oil and gas production, construction of tankers, use of high technologies, and establishment of banks.

Although very important, they are only part of the evolving picture. Making the effort to reclaim Russia's position in Latin America is a good start, but the Kremlin will have to work hard to keep it. It is not enough to send Tu-160 strategic bombers, the Pyotr Veliky missile cruiser or the Admiral Chabanenko destroyer there, even though their joint fire power exceeds that of all South American countries taken together.

"A few Russian ships are not going to change the balance of power," Secretary of State Condoleezza Rice said when asked about Russian warships off Venezuela during Medvedev's visit. And she is right, although a demonstration of the Russian naval flag was a good thing.

An analysis of America's attitude to Russia's reviving relations with South America makes an interesting study. For the past two decades, the Americans pretended not to be concerned about Russia's attention to the continent, and in particular its close friendship with Venezuela. They could be irritated by it, but they were definitely unconcerned.

According to them, Barack Obama is trying to find a way out of the economic crisis and ensure a smooth transition of power in the White House. In principle, he likes Moscow, they wrote, but is too busy now to give a proper response to the Russians, who took advantage of the situation to stage a provocation in the U.S. backyard.

But Medvedev's tour was planned long before the November 4 presidential elections in the United States, when nobody could say definitely who would win, McCain or Obama. And I don't see any logic in the media's hint that Moscow should have waited until Obama assumed office and determined his Latin American policy.

The overall U.S. sentiment is that "Russians have nothing to do in Latin America." When all newspapers write the same, it usually means that they had been leaked information from the State Department or the White House. This shows that the White House is seriously worried by Russia's return to Latin America.

Besides, diplomats like to present their rivals' smart moves only as minor achievements, especially when they themselves have missed the chance.

The United States will never fully abandon its backyard, because former paratroopers (Venezuela), Native Americans (Bolivia), bishops (Paraguay), the extreme left or moderately left politicians will not remain in power forever there.

When Washington comes to from the shocks of the elections, the financial crisis and the nearly total neglect of Latin America under the Bush administration, it will make a U-turn and head back to its southern neighbors. And we will find it very hard to withstand its economic and political offensive.

Latin Americans know that life without close ties with the United States will be very difficult despite Russia's rekindled love. The Kremlin should remember this and plan its strategy in Latin America so as to prevent a repetition of past mistakes, when it jettisoned some friends there, for example Cuba.

Immediately after winning the elections, Obama started rethinking the U.S. policy regarding Cuba. The latest issue of The Nation carried Sean Penn's "Conversations with Raul Castro about Obama, Guantanamo and the Pentagon."

Castro granted the interview to Penn, an old-time Democratic supporter and a personal friend of Obama, long before the November elections. The Cuban leader told him that he would meet with Obama.

"We should meet in a neutral place," he said. "You asked if I would accept to meet with [Obama] in Washington. I would have to think about it."

So, Obama will most likely re-discover Cuba, because that's what most Americans, including the Miami Cubans, want.

Russia will also have to compete for Cuba's attention with China, France, Canada and Spain.

During his Latin American tour, Medvedev spoke about such exotic things as the use of national currencies in Russian-Venezuelan settlements, visa-free travel to Brazil and Venezuela, and Brazilian football schools in Russia. The president was also awarded the two countries' highest orders.

However, his agenda also included much more important issues - and much more serious than sending Russian warships to the continent. Some of them are still on paper, but if they are implemented, Moscow will surge to the forefront of the global financial scene.

The main event happened after Medvedev had arrived in Brazil from Peru, where he announced a decision that can change the BRIC group of Brazil, Russia, India and China from a banking term into an international organization, or at the very least a consultative forum.

The Russian president said after his meeting with his Brazilian counterpart that Russia would host a BRIC summit in 2009. The BRIC countries are comparable to the European Union economically and financially, and by far surpass them in terms of energy resources. So, the world should respect their opinions.

The most important part of Medvedev's visit to Latin America is that he has made it. Since the beginning of Gorbachev's perestroika, Russia has been trying to forget about Latin America, for some obscure reason, and by doing so destroyed many achievements scored there by the Soviet Union.

Nobody knows how long this unfortunate situation would have lasted if not for George W. Bush, who placed the southern neighbors on ice.

Watch Medvedev's videoblog on the results of his trip: