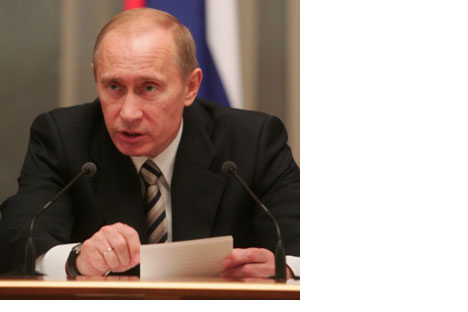 Putin also spoke out against insider trading and again blamed the West for the country's economic difficulties, adding that those trading on domestic exchanges would be compensated for financial losses, Interfax reported.

"Decisions concerning which securities to buy or sell on Russian markets are, for the most part, made abroad," Putin said, the news agency reported. "Moreover, the criteria by which these decisions are made have very little connection to the actual state of our economy or Russian companies."

At the same time, he was careful to point out that the country did not want to exclude foreign investors.

"No one is preparing to limit the activities of foreign capital in the Russian stock market - we welcome foreign investors," Putin said. "But at the same time, the task lies in properly building a large class of domestic investors as a powerful and capable financial institution of its own."

While the lack of domestic investors is clearly a problem and shares in Russian companies trade at levels below what might be expected given their fundamentals, said James Beadle, director of Pilgrim Asset Management, the blame for their performance should be shared around.

"On the face of it, Putin is completely correct - I think a lot of the market's reaction has had nothing to do with the Russian economy," Beadle said. "But Russia's situation has been, as we know, worse than most emerging markets. I put that down to the weak economic environment, the political risk and a lack of domestic investors."

While lashing out at the West, Putin said the government remained committed to turning Moscow into an international financial center.

"In the very near future, the government will examine a comprehensive plan regarding the financial center's creation," he said, adding that the financial crisis would perhaps change the global economic pecking order, affording Russia greater opportunity to achieve its goal.

Vladimir Milovidov, head of the Federal Financial Markets Service, followed Putin's comments at the meeting by elaborating on the state's plans for compensating investors for market losses, Interfax reported.

Milovidov explained that this would be achieved through a mechanism based on the Deposit Insurance Agency, which is designed to insure individual bank deposits.

"I don't see any clear obstacles to the creation of such a system of compensation based on the idea of the Deposit Insurance Agency," Milovidov said, although he added that the question would require further consultation with various ministries and departments.

There was skepticism over whether such a plan could work.

"It seems a little unrealistic to me," said Tom Mundy, an analyst at Renaissance Capital. "Maybe it would be better to think about how Russia can restructure its financial institutions."

While saying there was some truth to the charges Putin made, Mundy also said not all of the blame for weak domestic markets should be placed elsewhere.

"Russia's financial institution did break down. The banks didn't lend," he said. "[The crisis] is an inherited problem, and I can understand why the market is frustrated. But it does not mean that Russia is completely blameless.

"There is a little bit of blame to be passed overseas, and there is some internal blame as well with these oligarchs who had [overleveraged their companies]," said Ronald Smith, chief strategist at Alfa Bank. "There's blame all the way around."

In line with Putin's comments, the Presidium approved a strategic development project for Russia's financial markets through 2020, Milovidov reported. He added that the Presidium also approved a draft law designed to combat insider trading.

Mundy said the Kremlin's focus on a global financial center pointed to a healthy desire for economic integration and that, in the end, the crisis might actually help push along Russia's economic development.

"'The next stage in Russia's development is probably creating more transparency," he said.