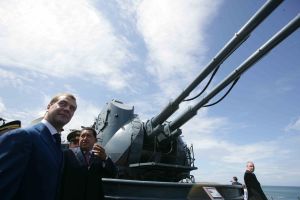 A nuclear missile cruiser and a submarine hunter along with two support vessels took part in the drills. The Russian ships arrived in Venezuela last week in an operation widely seen as the Kremlin's response to the U.S. decision to deliver aid to Georgia aboard warships following the country's conflict with Russia.

However, President Hugo Chavez insists the naval exercises weren't meant as a provocation to the United States or any other nation. Chavez has praised Russia for raising its profile in the Americas, while saying the U.S. Navy's Fourth Fleet, which has been recently re-activated, poses a threat to Venezuela.

Russia sent the nuclear-powered cruiser Peter the Great, the destroyer Admiral Chabanenko and support ships. They were joined by three Venezuelan frigates for the exercise, which was dubbed `Venrus 2008'.

The Russian squadron captained a Venezuelan frigate, while Venezuelan Admiral Luis Morales acted as captain of the Peter the Great.

"The exercise was quite a success. All things that had to be tested were tested with good results and in full. Now we have some experience of teamwork with the Venezuelan Navy. If our Navy needs these skills some time in the future, the experience of this exercise will certainly come in handy," concluded Anatoly Dolgov, captain of the destroyer Admiral Chabanenko.

Soviet ships and planes regularly visited Cuba during the Cold War, but Russian troops have been absent in the region since the Soviet Union dissolved in 1991.

Watch this story on video:
http://www.russiatoday.com/news/news/34157/video