Will NATO survive without Ukraine and Georgia? 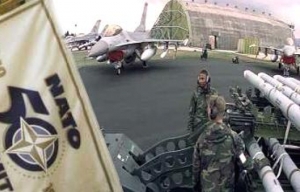 In NATO, one vote is enough to reject a decision. This time, Germany, Spain, Italy, Belgium, France, Luxembourg, and the Netherlands were against granting the MAP status to Ukraine and Georgia. Under the circumstances, Washington undertook a roundabout maneuver. U.S. Secretary of State Condoleezza Rice led the efforts of a group of NATO countries to bypass the MAP status and thereby expedite entry into NATO for the two countries.

However, European diplomats are worried not so much about the procedure as about the eventual result - is it worth creating this dual Kiev-Tbilisi problem for NATO? Germany suggested that the U.S. idea of skipping the traditional preparation pattern for NATO entry should be treated with "extreme caution." Other leading European countries supported this idea.

A source who took part in preparations for the Brussels meeting noted that the granting of MAP status to Georgia (and Ukraine) should not have even been discussed at the Bucharest summit last April, since this was one of the factors that encouraged Mikheil Saakashvili and his team to go to war.

This position is understandable. The United States will have a new administration in a month, but even if the old administration remained, the times have changed. In the new era the Europeans will have to ponder much more complicated questions than NATO's survival without Georgia and Ukraine.

Barack Obama will focus on Afghanistan, Iran, and adjacent countries, rather than on Europe. The European NATO members have every reason to expect a demand on their active participation in these plans. Would they like to do this close to Russia, relations with which will have been hugely spoilt due to Saakashvili and Georgia and Ukraine's accession to NATO?

The Brussels decision is quite understandable, though it is unclear what the next step will be. Also in Brussels, NATO decided to end the pause in relations with Russia that was initiated after Georgia's attack on South Ossetia. Talks on the future Partnership and Cooperation Agreement (PCA) between the EU and Russia began in Brussels on the same day. Their aim is to replace the treaty that expired late last year and was automatically extended. The NATO-Russia Council, suspended for the same reason, may also resume work.

What is the point of resuscitating something that was not working in the first place? The NATO-Russia Council was just a phantom; all it did was invent minor contacts to cover up profound misunderstandings. The new PCA is necessary, but in a very abbreviated form. It is the Europeans who insist that this agreement should contain the list of everything that they think Russia is obliged to do. Are we approaching the same deadlock, or worse still, moving to a new Georgian-style conflict?

Relations between Moscow and the West must be completely restructured, taking into account the sad post-1991 experience. The restructuring will coincide with the cardinal reconstruction of relations between the Russian Federation and the United States, with the gradual appearance of a new U.S. foreign policy, and in general, the shaping of a new world.