Will UN conference in Poznan save the climate? 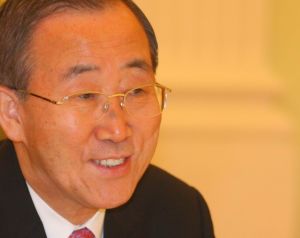 Ban Ki-moon, Secretary-General of the UN

The official title of the Poznan conference is the 14th UN Framework Convention on Climate Change. This is the fourth conference of the signatories to the Kyoto Protocol.

The pattern diagrams of the Kyoto process are the only simple and clear documents. As for the protocol, it is not even observed.

There are no grounds to expect a breakthrough in Poznan. It would be good if the conference encouraged us to take better care of the world climate.

In brief, the Kyoto protocol is an agreement committing its signatories to reduce the release of industry-produced greenhouse gas emissions. Its 161 participants pledged to cut back by 2012 their collective GHG emission by 5.2% as compared to the 1990 base level.

The United States is the number one violator of the protocol. It accounts for about 35% of harmful emissions. Having signed the protocol, it refused to ratify it. Without its participation, the protocol does not make much sense.

Having ratified the protocol in 2004, Russia behaved in a typically Russian way. It announced numerous projects to promote the protocol. Much was said about the need to invest in the development of eco-friendly technologies, and to set up a market to trade greenhouse gas emission quotas. But these were just words. In practice, Russia has not done anything at all. To be honest, we do not even know what we emit into the air for lack of a law enabling us to create a national registry to measure greenhouse gas emissions. The government explains this by the absence of scientifically substantiated criteria for measuring them since scientists cannot agree on these criteria.

On December 11 and 12, the Poznan conference will host the leading government officials from the participating countries. They will express their opinion about the conference. Americans have forewarned that they expect the conference to display realism and profound understanding of the problem. This sounds as if they are ready to reject any decisions the conference might make.

India and China behave as if the conference has little to do with them. When they joined the Kyoto protocol, their economies did not foul up the air as mercilessly as they are now, and no restrictions were imposed on them. By some estimates, China has already caught up with the United States in the scale of greenhouse gas emissions, while India is pulling ahead of Germany, France, and Britain.

Many scientists insist on changing the quota system. They suggest that quotas should be traded at centralized auctions to make more money, and invest all of it into the development of alternative energy sources. This will have to be done. Blocking greenhouse gas emissions with the Kyoto protocol is like patching millions of holes in a hose. Both Poznan and Copenhagen can only provide interim solutions.

The opinions expressed in this article are the author's and do not necessarily represent those of RIA Novosti.