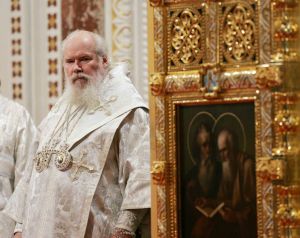 Tomorrow Moscow's Epiphany Cathedral will play host to the funeral of Patriarch Alexy II. The next day the higher church clericals will gather for an emergency synod meeting, where they will schedule a meeting of the national council of bishops, priests, monks and laymen: its delegates will elect the new head of the Russian Orthodox Church. Representatives of the church and expert communities share the view that Metropolitans Kirill and Kliment are the most likely candidates for the highest church post. The Council will choose not only the Patriarch, but also the further course of the church's development - either conservative or liberal.

On Saturday, on the next day after Patriarch Alexy II passed away, the Holy Synod held an emergency meeting. The higher clericals decided on the date and place of the funeral ceremony - according to the Patriarch's will, he will be buried in Moscow's Epiphany Cathedral. The Synod elected Metropolitan Kirill of Smolensk and Kaliningrad as the interim leader of the Church. He also headed the commission on the preparation for and carrying out the funeral of Alexy II.

Kommersant has already reported that Russian high-ranking officials are going to attend the funeral ceremony. Yesterday Russia's President Dmitry Medvedev signed a decree on organizing the funeral ceremony, where he ordered that the Russian Government and Moscow's authorities should provide the Moscow Patriarchate assistance in organizing the funeral of Patriarch of Moscow and All Russia Alexy II. In addition, Russian national TV and radio companies are supposed to broadcast the ceremony.

The preparation for the election is going to be implemented according to the following scheme. On December 10 a meeting of the Holy Synod will be held, where the date of the patriarch election will be determined. Not later than in half a year bishops' council meeting will be held, where nominees as well as the number of delegates will be announced. Then a meeting of the national council of bishops, priests, monks and laymen will follow, where electors will vote. The council's quorum is not less than two thirds of delegates from bishops, representatives of clergy, monks and laymen.

Officially, church leaders refuse to comment on successors of Alexy II. "I consider that speculating about the name of the next Patriarch when Alexy II hasn't been buried is immoral," chief of the Moscow Patriarchate's press service, priest Vladimir Vigilyansky, told Kommersant. "We set our hopes upon the Lord's will. He will determine who will be the next Patriarch." According to Vladimir Vigilyansky, any higher bishop of the Russian Orthodox Church may become the new church head. "A candidate must have the higher theological education and be over forty years old. In addition, he must be absolutely respected with local bishops and abroad. Thank God, there are a lot of such people in the church," the cleric summed it up.

However, representatives of the church and expert communities have already started discussing candidates for the Patriarchal See. According to the information of Kommersant, Metropolitan Kirill of Smolensk and Kaliningrad, Kliment of Kaluga and Borovsk, Yuvenaly of Krutitsk and Kolomna as well as Philaret of Minsk and Slutsk have the highest chances to be elected.

According to the majority of forecasts, Metropolitans Kirill and Kliment are the most likely candidates. Chairman of the External Church Relations Department, Metropolitan Kirill has been one of the most open church leaders. He played the role of a speaker and negotiator in one of the most reported achievements of the church - the reunification of the Russian and Foreign Orthodox Churches in May, 2007.

In addition, his department was responsible for settling the conflicts in the post-Soviet space. During the scandalous celebrations of the 1020 anniversary of the Christening of Russia, when Ukraine's Government tried to initiate the establishment of Ukraine's church (independent from the Moscow Patriarchate), Metropolitan Kirill applied much effort to frustrate the Ukrainian Government's plans.

Famous theologian deacon Andrey Kuraev is convinced that Metropolitan Kirill is the "brightest" candidate, "He is the person whose work has always been establishing good relations with different people - from secular officials to Catholics and Muslims." "Kirill is the most powerful political figure in the Russian Orthodox Church; also, he has ambitions," political scientist Stanislav Belkovsky believes. "At first he was not a favorite and became so not because of higher clerics' support, but due to his personal qualities - aggressiveness and charisma."

At the same time, experts note that Metropolitan Kirill may encounter the strongest opposition. Clerics confess that conservative moods prevail in the Russian Orthodox Church, which was evident during the scandal with Chukchi bishop Diomid. It need be reminded that Diomid accused the Russian Orthodox Church of excessive rapprochement with the secular power. "Diomid was defrocked, but quite a large part of his latent supporters remained in the church, and it means that all of them become potential opponents of Metropolitan Kirill," father Andrey Kuraev predicts. According to political scientist Stanislav Belkovsky, the conservative wing became stronger after the reunification of the Russian and Foreign Orthodox Churches because the latter traditionally followed the line of church isolation.

The main contender of Metropolitan Kirill is Metropolitan Kliment, who holds a not lower post in the church hierarchy - the Chancellor of the Moscow Patriarchate, which is similar to head of the presidential executive office. The Metropolitan is mainly engaged in internal affairs of the Russian Orthodox Church. He organizes large church meetings, personally informs the Patriarch about the state of affairs in the church. Metropolitan Kliment is considered the person Alexy II had the most confidential relations with.

According to analysts, Metropolitan Kliment may receive the protest votes. "There can be a situation similar to the Russian presidential election of 1996. The conservative part of the Russian Orthodox Church will vote against Kirill the same as Russians voted for Yeltsin against Zyuganov," - father Andrey Kuraev believes.

According to experts, the Council's choice will not be a simple choice of the Patriarch. It is a question of the victory of one of the church ideologies: conservative, aimed at the church's self-isolation, or liberal - demanding from the church not only the continuation of contacts with the secular power and other denominations, but also an independent political position in Russia.