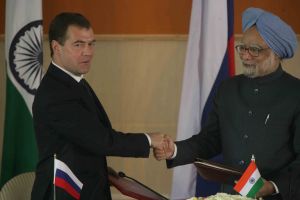 Following the coordinated terror attacks in India's financial center of Mumbai, which were called "carnage" in the local media, Russia's President Dmitry Medvedev paid an official visit to Delhi on 4-5 December. India`s meticulous journalists praised Mr. Medvedev`s calmness and his decision to stay at "Sheraton Maurya" hotel, while the US Secretary of State Condoleezza Rice, who had visited Delhi ahead of the Russian-Indian summit, preferred the residency of the US Ambassador to India David Mulford.

What`s the outcome of the Russia-India talks in Delhi?

1. The sides signed a joint Declaration, in which among other things they emphasized "an importance to implement an integral reform of the international financial and economic system in order to adjust it to new realia of global economy". Russia and India announced their preparedness to "aim at the establishment of a fairer economic world order, based on the principles of multipolarity, supremacy of law, equality, mutual respect and common responsibility". India announced its support to Russia as a mediator in the Caucasus: "In view of the recent war conflict in South Ossetia, Russia and India welcome the Medvedev-Sarkozy peace plan and hope the measure be enough to establish peace and stability in the region".

2. Moscow and Delhi signed a long-awaited atomic energy cooperation deal. In accordance with the agreement, Russia will build four more nuclear reactors at the Kudankulam nuclear power plant (state of Tamil Nadu) in addition to the existing power generating units, with the first to be commissioned in April 2009. Few more nuclear power plants are due to be constructed in India with Russia planning to supply nuclear fuel to its Indian partners. As the local media report, the move will increase the national available capacities in non-classical energy up to 90% (currently the reactors` maximum capacities are 30-40%).

3. The sides focused on military-technical cooperation (MTC), the issue which had been for some time a bone of contention in their bilateral relations. Yet no decision has been made on the cost of re-equipment of the `Admiral Gorshkov' aircraft carrier (probably, the issue will be settled by the new Indian government in spring 2009). The vessel`s re-equipment demands huge investments. However, India's Finance Ministry thinks there may be a precedent other participants of the MTC could use for their needs. Russia expects to win the tender for buying 126 multifunctional fighter jets but India again postponed the campaign. The sides yet have not agreed on T-90 tanks and nuclear submarines. (The recent tragedy in the Sea of Japan with Russia`s "Nerpa" submarine received an extensive and sometimes biased coverage in the Indian media). However, the participants of the talks had a kind of a backup, and India`s Defence Ministry signed a $1 billion deal with Russian "Rosoboronexport" to receive 80 multi-role Mi-17V-5 helicopters.

4. Dmitry Medvedev and his Indian counterpart signed a Memorandum on mutual understanding between the Federal Financial Markets Service and India`s Council on Securities and Stocks. Amid the global economic crisis, financial issues are expected to remain on the Russian-Indian agenda for quite a long time. I believe BRIC countries (Brazil, Russia, India and China) ought to establish an inter-regional economic zone, which would be relatively autonomous from traditional centers of world economy (US, Western Europe and Japan). The move could prevent global crisis deepening.

5. Some changes have been seen in the scheme of Russia-India trade turnover. Currently the deliveries of Russian machinery equipment make 40% of Russian exports. Experts indicate that the Russian business has begun its integration into India`s market: Joint Stock Financial Corporation "System" launched an all-India mobile operator project. However, Russian direct investments to India ($145 million) fall behind the influx of capital coming from Delhi: India has already invested about $800 million in Russian economy. The two countries seem to have boosted their cooperation in science. Still, Russia-India mutual trade turnover does not exceed $7 billion. Analysts name $16-18 billion as real achievement since then non-state participants of economic process usually disclose their interests and join in.

6. Although Mr. Medvedev`s visit to India cannot be called a "breakthrough", the talks were successful. The sides discussed their perspectives on bilateral cooperation and made another step toward stability in Asia.

The Reuters news agency writes: "Russia is competing with the United States for influence in India, a Cold War ally of Moscow which the Kremlin sees as a growing partner in Asia". What is most important here to my mind is that Moscow has finally focused on its role in India, one of the most rapidly developing countries worldwide. Russia begins its fight for India - this is the major outcome of Dmitry Medvedev`s visit to Delhi on 4-5 December.