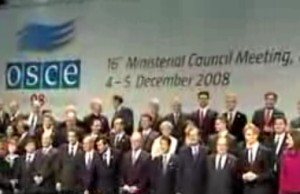 Russian president Dmitry Medvedev's suggestion to sign a new pact on European security, voiced on June 5 during his visit to Berlin, is finally getting some feedback. It became the central theme of the meeting of the foreign ministers of OSCE member states, held in Helsinki on December 5, 2008.

"Originally, the Russian side proposed having a special international summit on Medvedev's suggestion, but the message from West European leaders was that they would prefer to discuss it in the framework of the OSCE," said Yuli Kvitsinsky, a deputy chairman of the State Duma's committee for international affairs and the former Soviet ambassador to the Federal Republic of Germany.

The Russian side did not take offense in this, especially since the offer to hold a discussion in the framework of the OSCE's Ministerial Council in Helsinki came from France and Finland, the two countries with which Russia has traditionally had good relations. Originally, the idea came from the French President Nicolas Sarkozy, but it was vigorously supported by the Finnish Foreign Minister Alexander Stubb. "The reason I wanted to bring this to Helsinki is two-fold," Stubb said before the summit. "The first one is that I think it is time to discuss European security, and the future of European security. If Russia comes forward with a constructive proposal we need to have a careful look at it and discuss it together. And the second reason is that I think there is only one place we can do it, and that is the OSCE."

The Russians were lucky to have a remarkably high attendance at the summit. Out of 56 OSCE member countries, 50 were represented at the summit, and Medvedev's suggestion was the main subject of 17 speeches by ministers of various countries. In his speech, the Russian Foreign Minister Sergei Lavrov explained why Russia considered the new pact a necessity. "It is clear to us that the OSCE in its current form does not fulfill its main mission - providing equal and indivisible security for everyone," Lavrov said. "If in the beginning of the nineties the organization could stop wars, now it cannot prevent them. Unsanctioned use of force, in clear breach of the basic principles of the Helsinki Act, does not embarrass many countries any more."

In this situation, Russia suggested revitalizing some old arms reduction agreements, fulfilling the old "more security for less money" principle. "We are concerned about the fate of the START-1 and NPT treaties," said Vladimir Voronkov, the head of the Department for European Cooperation at the Russian Ministry of Foreign Affairs. "We want these old and tested instruments to continue working. Adequate suggestions were made to the other side."

Voronkov did not elaborate on the nature of these suggestions, but the situation with START-1 (Strategic Arms' Reduction Treaty, ratified in 1991) and NPT (Nuclear Non-Proliferation Treaty, signed in 1968) is indeed worrying and requires immediate action. START-1 expires in December of 2009, and there is no talk of any replacement coming soon. Meanwhile, this treaty, setting limits for Russia's and America's nuclear potentials, is the cornerstone of the arms control system. An international conference on reviewing the NPT is scheduled for May of 2010. NPT, which is supposed to limit the number of countries possessing nuclear weapons to the five countries which possessed nuclear weapons at the moment of NPT's original signing (Russia, the United States, China, France, Great Britain) also has an uncertain future, as there are more and more "informal" members in the nuclear club (Israel, India and Pakistan joined in recent years).

"The problem is that by their inability to achieve progress on disarmament, major nuclear powers make themselves vulnerable to critique from other countries, capable of developing nuclear weapons of their own," said Alexander Pikayev, the director of the department for disarmament and conflict resolution at IMEMO (the Russian Academy of Sciences). "If the big countries are behaving irresponsibly, why should the smaller ones be good boys?"

All of these developments increase the chances of Medvedev's initiative being taken seriously not only in Europe, but also in the United States. "Barack Obama said he would take disarmament issues seriously," said Sergei Rogov, the director of the Institute of the United States and Canada at the Russian Academy of Sciences. "The situation requires an urgent response to the challenge. I would expect serious negotiations on disarmament between Russia and the United States to start no later than in the summer of 2009."