Consumers cut back, but not on New Year's 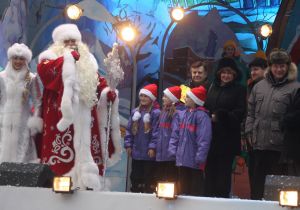 The financial crisis might be hitting businessman Nikolai Pavlov's wallet, but he is not going to cut back on his New Year's spending. "I've lost my money three times," said Pavlov, 55, as he shopped at an Azbuka Vkusa grocery store on Prospekt Mira on a recent evening.

"With the Soviet collapse, I was only able to buy some bread and salami for my family with savings that once could have bought two cars. Then I lost my money in 1993 and in 1998. This time, I would rather spend it."

Pavlov said he planned to splash out on a new fur coat for his wife and some jewelry for their two daughters.

"This is the most important celebration in Russia," he said of New Year's. "And I want my family to get the best this year."

Russian enthusiasm for holiday shopping appears to be unaffected by the crisis, and a recent survey indicated that people were actually planning to spend 12 percent more on New Year's gifts this year in comparison to last year.

This is in sharp contrast to the West, where stores started slashing prices in early November in hope of attracting customers.

In Moscow, stores have hung holiday lights in the windows, but there is little or no sign of discounts. They seem to know that there won't be a lack of customers.

"In the United States, retailers have to offer good discounts or people won't buy because of the crisis, but in Russia people buy anyway," said Natalya Smirnova, a retail analyst with UralSib Capital. "Russians don't like saving money."

Despite a slight decrease in personal purchasing power, Russians plan to spend 12 percent more on New Year's presents this year, according to a Deloitte survey published late last month. The survey, carried out in Moscow, St. Petersburg and four other large cities, found that Russians plan to spend an average of about 20,000 rubles ($693) this year.

In terms of holiday spending, Russia was on par with France, Belgium and Switzerland and far ahead of Germany and the Netherlands. In Ukraine, people planned to spend 8,450 rubles ($303).

The Deloitte study, carried out in early October among 800 people aged 18 to 65, said about 70 percent of Russians had not felt the impact of the financial crisis on their wallets. In Western European countries, however, 40 percent to 60 percent of respondents said they had felt the first signs of the crisis.

Mikhail Kirintyev, a retail analyst at Troika Dialog, said the situation had not changed in Russia, and he had not detected any changes in consumer behavior.

Ten people interviewed around Moscow seemed to confirm this. Not one was waiting for sales to save money on New Year's presents.

"Why should I save money on New Year's presents? To leave it in the bank and to lose it all? It's better to buy something for my family," said Yelena Nikitina, 35, while shopping at Sedmoi Kontinent near the Arbat.

"In a time of crisis, the less savings you have, the less money you lose," said Nikitina, a sales manager for a foreign firm.

Nikitina said she had bought all her presents already and had spent more this year than last year, "perhaps because everything is more expensive now."

Retail analysts said stores were offering small discounts on expensive goods such as premium alcohol brands, but prices were stable or increasing on other goods. Many stores think the crisis and the weakened ruble are reasons to raise prices.

Mikhail Khasin, an economist and president of the Neocon consulting company, said prices fall in the West because of strong competition, but the Russian consumer market is caught in the grip of monopolists and bureaucrats.

"Monopolists don't like to cut prices, no matter what happens," he said on Ekho Moskvy radio.

"Beside that ... we have the understanding of fixed expenses. These are expenses that the trade has to bear no matter what the prices are or whether there is a crisis or not," he said, referring to the practice of paying bribes to fire inspectors, police and other bureaucrats.

Moscow resident Oleg Belov, 43, said that although he was not going to cut spending on New Year's presents, he had stopped going to restaurants and pubs. His thoughts were echoed by Irina Korshunova, a 28-year-old lawyer who said she had stopped having breakfast in cafes and buying expensive cosmetics.

The Deloitte survey said the most desirable New Year's gift among Russians was cash.