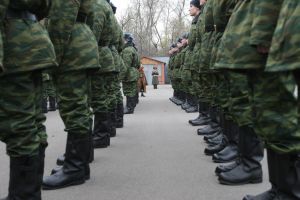 In short, he plans to remove 205,000 officers from the ranks within three years and leave only 150,000 officers at their posts. He would also reduce army units and troop formations to about one-tenth of their current numbers. Head of the General Staff Nikolai Makarov, who supports Serdyukov, has described this as the country's first serious military reorganization in the past 40 years.

These unprecedented cutbacks, if actually implemented, would mean a fundamental change to Russia's military model. With all of these changes about to take place, many opponents of reform have been asking, "Where is the new military doctrine that clearly defines Russia's main enemy in the 21st century?"

Lo and behold, last week the Security Council created a working group for the development of a new doctrine. General Yury Baluyevsky, the Security Council's deputy secretary, will head the group. It is clear that any doctrine produced by Baluyevsky, the former head of the General Staff who resigned in March reportedly over opposition to Serdyukov's reforms, will not support the minister's plans to downsize the army.

Baluyevsky has already indicated that when the new doctrine is issued, it will reflect changes in the world's geopolitical and military state of affairs, including the greater role the military needs to play in the country's foreign policy. He also said it would include "the legitimate use of nuclear weapons as a tool for strategic deterrence."

Baluyevsky's project to produce a new military doctrine is an old trick that has used by generals to bog down reforms indefinitely. This is how it works: First, they argue that a doctrine is required before any reforms can be implemented. Then they construct a doctrine suggesting that the United States and NATO are the main military threats to Russia, which jibes with many of Prime Minister Vladimir Putin and President Dmitry Medvedev's positions. In this way, the generals can oppose Serdyukov at any moment by saying, "Your ambitious plans to downsize the armed forces violate the letter and spirit of our military doctrine."

Kremlin leaders consider Russia to be a military superpower for the sole reason that it is capable of wiping out everything on Earth with its nuclear weapons. The country's leaders try to create the impression that Russia can take on half the planet's armies if necessary, and they insist that half the world is a threat to the country's security. If the political authorities were to fall into that trap, the military top brass would immediately request a budget large enough to counter the U.S. military machine. But because the government can't come up with $600 billion to rival the annual U.S. military budget, they are powerless to make serious demands of their generals.

Baluyevsky understands this ploy perfectly well, and that is why he insists the military's power play a greater role in foreign policy. But how is this possible while at the same time making huge cuts to the armed forces? General Makhmut Gareyev, the president of the Academy of Military Science, already rushed to declare that the revised military doctrine should confirm the country's ability to fight a world war. But Serdyukov's downsizing, a priori, rejects the concept of a mass mobilization army, and that inevitably means that Russia cannot wage global warfare with its conventional forces.

The only thing left in Russia's arsenal is nuclear arms, and this explains Baluyevsky's strange reference to "the legitimate use of nuclear weapons as a tool for strategic deterrence." Within this framework, only nuclear force can serve as a deterrent. And if that is the case, it dangerously lowers the threshold for the use of nuclear weapons. I don't think, however, that the Kremlin is really ready to start a nuclear war over some chance incident.

The process of revising the military doctrine could prove to be a moment of truth. Russia has two basic choices: Either it can try to improve the outdated model of the armed forces, which means renouncing its military superpower ambitions; or it can try to maintain its superpower status at all costs, which means it will essentially defeat serious attempts to reform the military. The generals no doubt will use the revision of the military doctrine once again as an opportunity to put off all reforms.