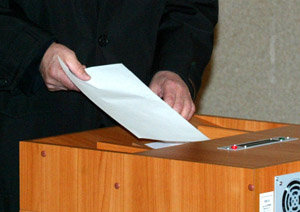 Last weekend (most) of Russia's best known democrats met in Khimki, not far from Moscow, to inaugurate a new political movement. Solidarity, named for the Polish trade union credited with a key role in bringing about the end of communism in Europe, is an alliance of liberal parties devoted to the not uncontroversial end of "dismantling the Putin regime."

Russia's Democrats - like the nationalists and communists - are doing their level best to make political hay out of the current economic downturn. For all opposition groups, regardless of orientation, economic hard times represent an opportunity. For the Democrats of Solidarity, whose stated aim is not the promotion of any one political principle, other than "the restoration of political competition," the incumbent government's woes are perhaps most pleasing; though they might do well to worry about who might win the political competition that the crisis may open up.

Especially since the democrats themselves are a fractious bunch - at least as fractious as the Nationalists of the far right - and are unlikely to field a united front that could make much gain in elections. The groups gathered in Khimki included Gary Kasparov's United Civil Front, former Deputy Prime Minister Boris Nemtsov and renegades from the now defunct Union of Right Forces (SPS) and Yabloko. Former Prime Minister Mikhail Kasyanov, who has been a prominent ally of Kasparov's in the past, was conspicuously absent. And there were reportedly disagreements amongst the delegates about whether cooperation should be allowed with left wing opposition groups (Kasparov is reportedly open to cooperation with anyone opposed to the Kremlin. Valeria Novodvorskaya, a noted anti-communist liberal politician and the leader of the Democratic Union party, is resolutely opposed to any collaboration with the left).

Dmitry Kataev, a former deputy of the Moscow City Council and the Moscow City Duma, who was at the meeting on Saturday, said that such differences are to be expected. "These are quite natural discussions. They are happening because there was a long history of antagonism between leftists and rightists in Russia, at a time when really, the country was ruled not by the right or the left, but by a bureaucracy."

Being candid about one's divisions is commendable, but it does not mean that they will go away, or will be any less detrimental. Nemtsov told a preliminary meeting in November that to avoid the bickering that has marred previous attempts to unite the democratic opposition, "we will not have leaders; we will have collective leadership." That is a laudable compromise, but it has been met with skepticism. The Kommersant daily reported Monday that there was a struggle between supporters of Kasparov and Nemtsov to secure the "informal leadership" of the group (Nemtsov's apparently have the upper hand). And it is unclear whether the alliance will last once elections come around, and the various leaders are tempted to compete against each other.

Though whether any of the composite groups making up Solidarity will actually compete in elections is doubtful. The flagship democratic parties, Yabloko and the SPS, who themselves tried and failed to unify, had a particularly bad election in November of 2007. They failed to make the seven percent threshold and lost their foothold in the Duma. At the time Kataev criticized Kasparov and Kasyanov, who were urging democrats to boycott the elections, for splitting the vote. Even he admits, however, that it would not have been enough to make the threshold (Yabloko and SPS took only 2.55 percent of the vote between them). The subsequent dissolution and assimilation of SPS into the Kremlin-friendly "Right Cause" party earlier this year, and Yabloko's refusal to be associated with Solidarity, have made things even more difficult. Kataev now says that "if elections were to take place now, the politics of boycotting would be justified."

So Solidarity faces a more fundamental problem; before they worry about internal divisions, they need to gather enough support to make such divisions damaging. And it is unclear exactly how that is to be achieved.

Of the several objectives the organizers laid out (Kasparov spoke of "dismantling the Putin regime," and rehabilitating basic liberal principles that "have become associated with failure, misery or reduction of freedom;" Novodvorskaya mentioned creating an "orange movement," if not a revolution), probably none is as important as widening the base of supporters. But the order of priority has yet to be laid out.

"The most important thing right now is increasing the number of the members in this movement, but such members that are doing concrete things, such as in the fields of ecology, housing politics, building of cities, social problems, education, security," said Kataev. Others, including Nemtsov and Kasparov, seem more preoccupied with confronting the authorities.

In each of these objectives the democrats are banking on the unfolding crisis to aid them. That gamble may be excused by their precarious position (the democrats, even more than the communists and the nationalists who pin similar hopes on the crisis, have little other hope of reviving their fortunes), but it is as yet unwarranted. VTsIOM's social development indexes show that despite increasing pessimism about the economic situation, faith in the political system has yet to be seriously tested. Possibly that is due to perspective - one Western economist visiting Moscow this week was struck by the lack of understanding of just how serious the economic situation is, "which might be because things look a lot worse from the West." But whether because the effects have yet to be felt by ordinary people, or because the mainstream media has done a good job of playing down the crisis, the truth is that the much awaited political earthquake has not yet emerged - and those looking for warning tremors cannot help but seem indecently impatient.

Solidarity, for its part, is set to clear up some of the ambiguities about its purpose in February, when it is set to release its manifesto. In the meantime, it can be assumed that the debates inside the movement will continue, and that is perhaps appropriate (if not necessarily helpful) for a movement dedicated to the restoration of political competition. The greatest tragedy would be a restoration of political competition without the rehabilitation of the liberal values that Kasparov urged. "If there will really be serious political exasperation, and the democratic reforms are compromised, then the leftists will come to power. But most likely these will be the far left, because the moderate left has little credibility," warned Kataev. The key to political competition is making sure that the competitors know the rules.