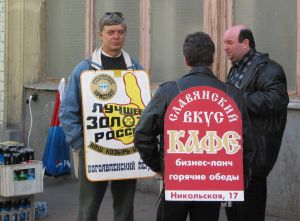 The financial crisis, which started with Moscow's financial markets, is trickling down to Russia's regions and former Soviet republics. After Russia cut the quota for migrant workers for 2009 by half, announcing its readiness to employ just one million 900 thousand migrants instead of the planned three million 800 thousand, construction projects in many of Russia's regions stalled, and foreign workers began heading back to their native countries, this time unable to bring in the much needed money.

However, this situation hurts not only the poor CIS republics, but also many Russian regions, where the cancellation of construction projects is expected to hamper one of Vladimir Putin's and Dmitry Medvedev's sacred cows - the national project on providing Russia's families with living space.

"The two industries in our region that were worst hit by the crisis are the auto-making industry and construction," said Pavel Ipatov, the governor of the Saratov region, at a press conference at the RIA Novosti news agency. "The construction companies are wrapping up the projects that they had already started, and there are almost no new ones. The demand for real estate dropped by half since we first heard about the crisis in August."

The Saratov region, located 800 kilometers to the south-east of Moscow and populated by some two million people can be called an average central Russian region, and thus its situation is indicative of the general trends in Russia. For Ipatov and his colleagues, the crisis became an unpleasant surprise, since the region had been steadily developing during the last ten years.

"During the last four years we increased the region's GDP twofold, from $1.5 billion to $3 billion," Ipatov explained. "In the same period, construction grew from 420 million square meters per year to one million 100 thousand meters, almost threefold. Even now, during the crisis, we try to minimize the losses by supporting the production of cement and construction materials, which allows us to set the market price for them lower."

Despite the expected fall in next year's construction statistics, the region is struggling to fulfill its obligations before the young families, the main "target group" of Putin's national projects. "Legally, families where both spouses are under the age of 35 are included in the category of young families and are eligible for priority access to new apartments, if they register in the administration," Ipatov said. "Right now, we have about four thousand such families registered. Every year we provide apartments to 2500 of them. If we manage to keep this pace, by the year 2010 we shall have no more `homeless' young families left."

The real estate prices in Saratov have been decreasing during the last few months, and have now stabilized at the level of 23,200 rubles ($860) per square meter, a level still beyond the purchasing capabilities of the bulk of the region's population, where the average salary is 12,000 rubles ($440).

Meanwhile, the Ukrainian and Tajik workers who made up the bulk of the low-qualified workforce in Saratov and in other Russian big cities are making desperate attempts to remain in Russia, looking for other jobs and often falling prey to the criminal world. "I went home for a week and returned to Moscow only to find out that I was fired due to the administration's policy of slashing staff," said Ivan Mikhailik, a migrant construction worker from the town of Lutsk, Western Ukraine. "I found a job with a company selling natural medicine, but I am not sure I will have enough money to pay the rent for the room where I live in Moscow."

The police have reported that the unemployed migrant workers, many of whom speak almost no Russian, either commit crimes trying to feed themselves or fall victim to criminal gangs. Tajik workers, who had a quota of 600 thousand workplaces in Russia for the year 2008, are the most frequent victims, with 356 people dead in 2007 and 358 in 2006. "During the first four months of 2008, 182 Tajik workers were killed in Russia. This allows us to expect a dramatic increase in this sad statistic by the end of the year," said Gavkhar Dzhurayeva, the head of a human rights NGO "Migration and Law" in Dushanbe, Tajikistan's capital.

Some officials in the former Soviet republics try to put on a brave face, saying that the layoffs in Russia and the subsequent return of workers can have a beneficial effect on their countries' economies. "I would not overdramatize the situation with our workers in Russia," Yuri Muntyanu, the deputy minister of economy and trade in Moldova, said during a phone-in televised conference organized by RIA Novosti's bureaus in Chisinau and Kiev. "I would prefer to see them all at home, here."

Migration experts, however, expect no more than ten to 15 percent of migrant workers from Ukraine and other post-Soviet republics to return home, due to the fact that in these countries, the economic situation is worse than in Russia.