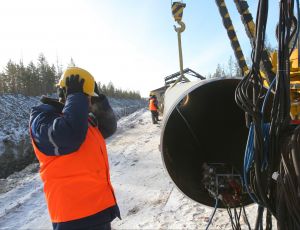 The intensified contacts between gas-supplying nations have drawn close attention from major Western energy consuming countries, worried that the organization could move to try to influence world prices in the same manner as OPEC.

The gas exporting countries have maintained that they would remain unable to fix prices because supplies are tied to fixed pipelines and long-term contracts.

Ministers from the 11 member countries, which include Iran, Libya, Qatar and Nigeria, adopted a charter making provisions for an organization headquarters, secretariat and chief executive.

The ministers chose Doha, the capital of the Gulf nation of Qatar, as home for the headquarters, despite a strong push by Russia in favor of St. Petersburg. The chief executive for the group, a secretary general, will be elected at a meeting in Doha next year.

"We finally created a full-blown international organization with very ambitious and outstanding goals," Energy Minister Sergei Shmatko said after the meeting at the President Hotel.

One of the goals will be consulting each other on future investment so the countries don't produce more than the market needs, Shmatko said.

"Avoiding the creation of an unnecessary oversupply of gas in one region or another, which would undoubtedly end up putting pressure on prices, is of paramount importance," Shmatko said during the meeting.

The group would also consider alternative mechanisms for determining gas prices to the current method of tying them loosely to the price of a basket of oil products, Shmatko said.

Addressing the event, Prime Minister Vladimir Putin said that any rise in gas prices as the Gas Exporting Countries Forum morphs into a closer-knit group should not be blamed on cartel agreements.

Putin said that rising prices will result from the fact that extraction is getting more difficult and expensive as companies move to tap more remote deposits.

"Despite the current economic slowdown, and even despite falling prices for energy ... the era of cheap energy resources, including an era of cheap gas, is, of course, drawing to an end," Putin said.

The gas trade is becoming more flexible, as countries increasingly move to buying and selling liquefied natural gas, which is transported by tankers rather than pipelines, Putin said, appearing to offer it as one more reason for gas producing countries to work together.

The Gas Exporting Countries Forum could gain a role in EU policy making for the energy market, Putin said, while charging that European officials were creating uncertainty for gas producers.

"The problem of erratic legal regulation has become really prevalent," Putin said of the EU. "Obviously, it takes joint efforts by all the parties concerned to make regulations more stable."

In a sign that Russia was vying to take a leading role in the group, Putin offered to pay the bill for a headquarters located in St. Petersburg.

The city's governor, Valentina Matviyenko, arrived to deliver a presentation praising the city's historical legacy. She quickly left the meeting before Shmatko announced that Doha had won the vote. Algiers and Tehran were the other two candidates.

Officials offered no further comments about the event beyond Shmatko's 10-minute question-and-answer session following the meeting and prepared speeches by visiting minister's broadcast on closed-circuit television.

The contents of the charter they signed appeared to be a closely guarded secret.

Asked if the Gas Exporting Countries Forum will make the contents of the charter public, Deputy Energy Minister Anatoly Yanovsky answered simply, "Why would we do that?"

A member of the delegation from Trinidad and Tobago, David Small, declined to let a reporter look at a copy of the document. To a suggestion that consumer countries might get suspicious if the charter remained out of the public domain, Small said, "They will be suspicious no matter what we do."

The mines, industry and energy minister from Equatorial Guinea exemplified the information value of the prepared speeches in his address.

"For those of you who have heard little of Equatorial Guinea," Marcelino Owono Edu said, "it is located in the Gulf of Guinea."

Gas must be free from politics - Putin