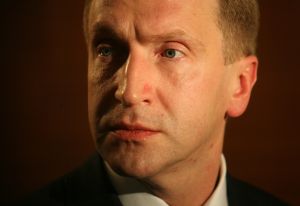 The list, which has already been dubbed a list of "the favored few," enumerates companies working in 25 spheres of the economy, from the oil industry to the media. The government included only companies that employ more than 5,000 people, and have annual sales of no less than 15 billion rubles. Analysts fear that the government's new initiative may engender a welfare mentality, and ultimately do a disservice to the privileged companies.

Prime Minister Vladimir Putin instructed his government to compile a list of the "select few" on December 15, and eight days later a government commission headed by Igor Shuvalov had already listed 250 companies. Economic Development Minister Elvira Nabiullina considered it incomplete, and another 45 companies were added.

The list does not give any hints about the government's economic priorities. It contains companies in fuel-and-energy, transportation, mining, metallurgy, food processing, and chain retailers such as X5, Kopeika, Viktoria, and Magnit. It is also clear that major coal mining companies have been included for other than economic considerations. Officials understand too well that shutting down mines is fraught with social implications.

There is no clear understanding of how the government will assist its favorites. Immediate plans provide only for detailed monitoring of the financial and economic status of the selected companies by profile ministry working groups. Once verified officials will decide what companies need government assistance, and how much.

The government plans to help major companies with a general package of instruments, such as loans, subsidized interest rates on current loans, tax debt restructuring, alleviated customs duties and tariffs, and awarding contracts. Deputy Prime Minister Igor Shuvalov said that the government is not planning to tighten control over the rescued companies. It will not introduce government representatives into their boards of directors.

The government has not yet promised financial aid to any company although it was a request for money that compelled many top managers to camp on the doorsteps of ministerial cabinets. Nor has the government specified how much it will spend on the support of strategic companies. However, the companies have mentioned that they need about 3.5 trillion rubles from the state, which is 5.6 times more than is reserved in the 2009 budget for the support of strategic enterprises.

Independent experts have repeatedly pointed to the chaotic and incomplete nature of the government's anti-crisis measures. It seems that the current initiative is no exception. A company on the coveted list may develop a welfare mentality and stop looking for independent anti-crisis solutions.