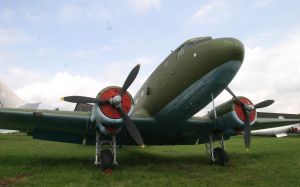 Kyrgyzstan's president plans to terminate an agreement with the U.S. on a military airbase in the Central Asian state ahead of his visit to Russia later this week, a popular Russian daily said on Monday citing sources in Bishkek.

Vremya Novostei said the move could help President Kurmanbek Bakiyev secure $2 billion in financial aid from Russia, which also maintains a military base in the country.

Former Soviet republics in Central Asia have seen increased geopolitical and economic rivalry between Moscow and Washington of late.

Russia has also been unnerved by the emergence of new NATO bases near its borders and controversial plans by the U.S. to place a missile interceptor base in Poland and a radar in the Czech Republic.

Bakiyev plans to sign a decree ordering the closure within six months of the Gansi base, located at Manas airport in the country's capital, Bishkek, which the U.S. has run since the 2001 antiterrorism war in Afghanistan, the paper said citing unidentified sources.

The decision could be an unpleasant surprise for U.S. President-elect Barack Obama, who is due to be sworn in on January 20, the paper said. Washington may need more bases in countries neighboring Afghanistan as Obama plans to increase the U.S. military presence in the war-ravaged country by up to 20,000 troops.

The United States has recently stepped up ties with oil-rich Kazakhstan, which allowed U.S. planes to fly over its territory during the invasion of Afghanistan and also sent troops to Iraq. Uzbekistan closed its airbase in 2005 expelling the U.S. personnel stationed there, but has recently sought to improve ties with the U.S. and other Western powers.

Russia's premier, Vladimir Putin, said late last year the country would provide Kyrgyzstan with a $300 million subsidized loan and $1.7 billion in investment, the paper said. The money is vital for the impoverished state, which will have to pay $240 per 1,000 cu m of Uzbek natural gas this year against last year's $145.

Critics say the decision could discourage foreign investment in Kyrgyzstan. But some analysts argue it could be welcomed by the public as anti-American sentiment grew following incidents involving U.S. personnel, the daily said.

Some observers in the country quoted by the paper claim the authorities are seeking to secure aid in order to consolidate their position ahead of mass anti-government protests, which the opposition said would take place in March.

Kyrgyzstan has been plagued by instability and anti-government protests since Bakiyev came to power in 2005, toppling his long-serving predecessor Askar Akayev.