The rebels find a cause 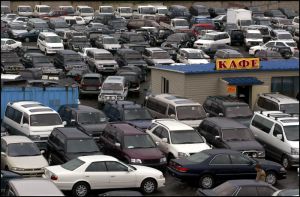 Protests in Russia's Far East over plans to restrict the import of foreign-made cars have been seen as a sign that the popularity of the Medvedev-Putin government is on the wane. Opposition parties have seized the opportunity to side with the little man against the unfeeling central government. But enthusiasm for car owners' rights and antagonism to the Kremlin have been adopted only reluctantly, in an effort to combat their own popularity problems.

The new customs fees came into effect at midnight last night, significantly increasing taxation on imported cars by as much as 80 percent, depending on the age of the car. For those older than five years, the importer could end up paying as much as 5.8 euro per 1 cubic centimeter of the engine, depending on the number of cylinders, against the old maximum of 3.2 euro. Fees on cars produced within the last five years will go up to 3.6 euro compared to the old fee of 1 euro per cc. The threshold has also been lowered down from seven years to five.

All of this will inevitably drive up the prices on imported cars, especially used ones, which have always served as a cheaper alternative to owning a Russian car or forking out considerably more to purchase a new foreign model. The point of the new legislation is to give Russian automakers the protection they need to develop by keeping the demand for Russian cars consistent. This also fell in line with recent efforts by foreign carmakers to move production to Russia in order to bring down production costs and gain a considerable advantage in one of the world's hottest car markets.

However, the end customers didn't buy into the logic and staged mass protests. Their demands were supported by various political forces, including Just Russia and the new Right Cause party. But it was the Communists who took the center stage, not just joining the already planned demonstrations, but planning their own in unison with those held by the Russian Car Owners Federation. The car owners say the new tariffs should not be put into effect until the domestic car industry is strong enough to compete with imports. The Far East became the center of the protests. Right-hand-drive vehicles imported from Japan, imports of which may be banned altogether, make up the vast majority of cars on the roads in Far Eastern cities, where it is prohibitively expensive to deliver Russian made vehicles.

Furthermore, opponents of the measures say the tax doesn't come at the right time and the market segment taken over by foreign carmakers cannot possibly overlap with that held by domestic manufacturers.

"This segment has been decreasing for some six years and the imported used cars don't rival Russian cars. If Russian carmakers can be rivaled by anyone, it would come from the new cars imported or manufactured here," said Sergei Kanaev, head of the Moscow Representative Office of the Russian Car Owners Federation. "People just want to get good safe cars at a good price; they were paying 5,000 euro but now it will be around 9-10,000. They won't have this opportunity anymore," he added.

But that was not the only message the communists tried to get across, championing a more complex agenda.

An address released by the KPRF before Saturday's rally in Vladivostok called for mass protests against growing unemployment, rising prices and shrinking incomes, challenging the government's promises to "make life better by 2020." The ruling regime was dubbed a "government of oligarchs" and people were discouraged from throwing their support behind it.

The very notion that communists might protest against measures that will actually hit car dealers rather than the average customer seems perplexing, especially in view of their calls for increased support for the Russian car industry. That, coupled with the fact that their platform stretched far beyond abolishing the increased import taxes and included veiled calls for the current government headed by Vladimir Putin to be ousted, suggests the communists saw the rather crowded rallies as a good chance to further their political agenda and garner enough support to undermine the government. Furthermore, some of those supporters that elected to join in wore orange ribbons reminiscent of those participating in the Orange revolution in Ukraine four years ago.

The opportunity for that seemed to be as good as at any time over the whole time of Putin's tenure. Economic troubles have gone deeper than mere consequences of the global financial crisis, as the authorities have been trying to characterize them, and have turned into a large scale economic crisis. The effects have permeated not only the country's financial markets, but key production sectors as well as commodity producers after prices sank on decreased demand and negative expectations. A report released by the KPRF listed numbers provided by the Public Opinion Foundation reflecting disenchantment with the country's political leadership after its anti-crisis policies failed to produce any palpable results. Putin's ratings have declined from 78 to 65 percent since October, while Medvedev's approval fell by five points to 51 percent.

Shattering Putin's popularity and taking a shot at increasing its own political capital seems to be the obvious motive behind the KPRF's campaign against the import taxes. But, the true objective appears to be far less sinister.

The communist party has had its own share of struggles with public opinion ratings and a declining electorate, which are way more serious than anything the current government has ever had to deal with. The number of votes the party can amass at parliamentary elections has been gradually declining, hitting new lows every time. The KPRF took just 8.17 percent of the votes at the last election held in 2007, marking a considerably weaker performance than in 1999, when it took first place and almost a quarter of all votes, and even in 2003, when it finished second with 12.61 percent.

"For them, it may be a matter of survival," said Pavel Salin, expert at the Russian Center of Political Trends. With the regional elections looming, this may be the last chance to make an appeal to the electorate, which explains why the would-be used car buyers were chosen as target audience.

The struggle to survive will not go as far as to spark a major public outcry against the ruling regime or come down to any serious efforts to rival it. Even the tough line toward the government was assumed with a certain degree of reluctance.

"Since that was among the sentiments expressed at these rallies the KPRF had to adopt it, even though they wouldn't speak out against the Kremlin like that. They have enough public support to be allowed to criticize the government more than other parties but there are certain limits, such as not to directly lash at the [Putin-Medvedev]'tandem,' and they do abide by them to keep afloat," said Salin.

At the same time, not all car owners seem to be happy with their demonstrations becoming subject of some of the parties' political expediency. "It's great that they support us. But it's important to specify that we're fighting specifically against the custom duties; but the communists calls for the ousting of the government, we're not behind any of that; we do want support, but not drivel," said Kanaev.