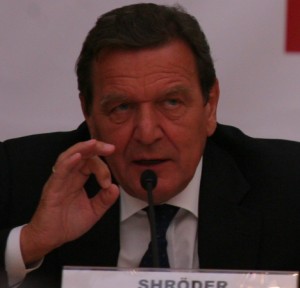 BP, caught for months in a dispute with its Russian shareholders in TNK-BP, expressed confidence that Schroder's involvement would be good for TNK-BP and Russia.

Schroder said he would make TNK-BP a beacon for foreign investment in Russia.

Industry watchers viewed the independent directors as capable of being impartial.

Schroder developed close personal ties with Prime Minister Vladimir Putin when both were heads of state. He is also chairman of the shareholder committee of Gazprom-controlled Nord Stream AG, the company that is preparing to build a gas pipeline to connect Russia and Germany under the Baltic Sea.

Shokhin is president of the Russian Union of Industrialists and Entrepreneurs. He sits on the boards of LUKoil, Russia's largest publicly traded oil company, and Russian Railways, the national rail monopoly.

BP announced the names on Thursday after the oil major and its Russian billionaire partners in the 50-50 venture went through a bruising corporate dispute last year. They finally decided to bury the hatchet in September by moving to include three independent directors on the board and install a new chief executive.

The third independent director on the 11-member board will be James Leng, board chairman of the mining giant Rio Tinto.

"The counsel of such a distinguished statesman, who brings both enormous geopolitical experience and a history of strong relationships with Russia, gives me particular confidence that the next chapter in the progress of TNK-BP will be good for all shareholders and for Russia," he said in a statement.

Schroder said he would help make TNK-BP a model for foreign investors of what they can accomplish in Russia.

"I feel certain that, with the support and trust of both shareholder groups, I will be able to make a contribution to the company's success that will serve as an important example of Russia's cooperation with international investors, thereby providing a significant contribution to Russia's integration in the global economy," he said in the statement.

Hayward said the new board "can achieve good business alignment between the shareholders of TNK-BP and safeguard the interests of all sides."

Mikhail Fridman, one of the Russian shareholders, said the independent directors would allow the company to enter the global arena.

"Their experience and wisdom will be invaluable as the company enters the next stage of its development and focuses on transforming itself into an independently managed international major with global ambitions," he said in a separate statement, from TNK-BP.

Russian shareholders, known collectively as the AAR consortium, have said part of the reason for the feud with BP was the British company's reluctance to allow the joint venture to operate globally, which would sometimes make them competitors.

The rest of the board will consist of four representatives from each of the two shareholder groups. BP has nominated its senior executives, while AAR has proposed its shareholders Fridman, Viktor Vekselberg, Len Blavatnik and Alex Knaster.

BP said last week that it would announce a new TNK-BP chief in the "coming weeks." That person will need to have substantial Russian work experience and Russian language proficiency, the partners in the venture agreed when ending the dispute in September. The new chief is expected to be Denis Morozov, former head of miner Norilsk Nickel.

Vekselberg has an interest in aluminum maker United Company RusAl, a rival of his likely fellow board member Leng's Rio Tinto.

Even the support of independent directors will not be able to force decisions on one of the sides in the venture when it comes to major deals. A clause in the new shareholder agreement, announced last week, said only unanimous votes would decide substantial acquisitions, divestments, contracts and any projects outside the business plan.

By "substantial," the shareholders mean deals worth more than $1 billion, said BP spokesman Vladimir Buyanov. The board will have until March 31 of every year to endorse that year's business plan unanimously, Buyanov said. Afterward, a simple majority will do, he said.

The track records of the new independent directors indicate that they will be quite independent, said Ilya Balabanovsky, an analyst at UniCredit Aton brokerage. "I wouldn't say that some of them would defend mostly Russian interests. They will look at the merits of the case," he said.

Both Schroder and Shokhin "meet the requirement of being independent," said Denis Kulikov, director of the Investor Protection Association.

But the independent directors would not be able to do much if another major spat erupts, said Alexander Nazarov, an analyst at Metropol. "The previous conflict showed that the board of directors - even if it's loyal to one of the sides - doesn't mean anything until the shareholders come to terms between themselves," he said.

BP held a majority in the conflict-time board.