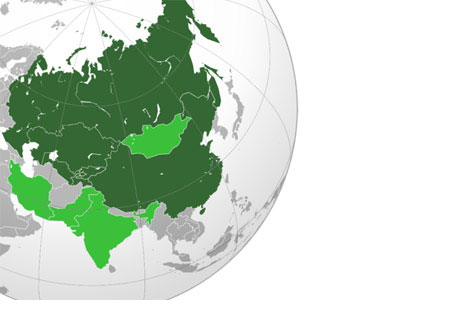 The Shanghai Cooperation Organization (SCO) has its roots in the post-Cold War period when it started as a bilateral Russo-Chinese security cooperative arrangement and gradually developed into a multilateral framework for strategic partnerships. It has acted since as a security provider for the Central Asian region. Despite the SCO being a potentially formidable organization - a region led by two great powers, a quarter of the world's population, and vast oil, natural gas and coal reserves; it remains largely misunderstood and understudied.

The SCO is a new mode for nation-to-nation relations and regional cooperation, structured around the concept of the 'Shanghai Spirit' which calls for, among other things, non-interference in the domestic affairs of member states, mutual respect for national sovereignty, and equality and consensus among members. While it has certain attributes of an alliance and security community, the most apposite description of the SCO is that of a strategic partnership, based on a Russo-Chinese alignment, with the underpinnings of an interlinked network of bilateral strategic partnerships, such as Russia-Uzbekistan and China-Kazakhstan, among others.

The term 'strategic partnership' can be traced to the business studies/organizational theory literature that define it as a 'pact between two or more organizations to build and achieve mutual long-term goals and commitments'. In the context of international relations, it refers to the coming together of two or more states for a general security purpose - known as a 'system principle', which is goal-driven, not threat-driven, of which economic exchange is a key element. Further, it is characterized by informality and low commitment costs. Since it is a much looser arrangement than formal alliances, states find it much easier to commit themselves to it.

The SCO, initially a 'constructive partnership' in 1994, was upgraded to a strategic partnership in 1996, when the Shanghai Five was founded (with Kazakhstan, Kyrgyzstan, and Tajikistan). These states (and Uzbekistan, which became a member in 2001) together with China and Russia made for a good 'strategic fit' since they had compatible domestic systems and shared security interests. The raison d'??tre for the SCO was providing for a new security model for Central Asia and also a new 'multipolar' international order, as opposed to the unipolar, hegemonic world order that the US was promoting. Among others, the SCO was designed to address the issues of terrorism, separatism, and extremism, which it regards as the main threats confronting its member countries.

The SCO has a complex organizational structure with member states coupled at several levels in a vertical hierarchy. The Council of Heads of State is the top decision-making body, followed by the Council of Heads of Government, and the Council of National Coordinators. The two most important permanent bodies of the SCO however, are its primary executive body, the Secretariat, with its headquarter in Beijing, and RATS (the Regional Anti-Terrorist Structure), headquartered in Tashkent.

The scope of the SCO ranges across three main functional areas - security/diplomacy, military/defence, and economic. In the first area, the SCO has helped lend weight to an alternative world view - that of a multipolar world, an idea which is increasingly gaining ground. Additionally, the SCO provides protection for Central Asian states, which see this arrangement as a way of bolstering or protecting their territorial integrity and authoritarian regimes against pressures from the West. There has also been greater cooperation between China and Russia within the UN Security Council. In the area of military and defence cooperation, the arms sales are healthy and the SCO member states continue to cooperate on a host of traditional and non-traditional security threats. The RATS has been especially successful in intercepting drug trafficking and clamping down on militant activity. Its joint operations with the CSTO (Collective Security Treaty Organization) have also been very successful in the areas of counter narcotics and anti-terrorism. As far as trade and economic links go, not only has trade between China and Russia increased significantly, but there are also plans for developing a free trade area by 2020.

The SCO holds immense scope for expansion; it has big ambitions. In the event that its membership is extended to include India, Iran, Pakistan, and Mongolia, it would become a formidable organization, difficult for the international community to ignore. It is regarded not only as an effective security organization, but also among the least troublesome in the Asia Pacific region. The organization therefore, needs to be taken far more seriously, especially within western academic circles which tend to be very ethno-centric in their view of the SCO.

* Will the Chinese domination of the SCO increase in the coming years and will Russia continue to play second fiddle or the junior partner within the organisation?

* How will the present financial crisis affect the SCO?

* There are forces other than those brought out in the presentation that affect the SCO and might hamper its growth in future, including demography - Uzbekistan has a population of about 15 million, which is more than the population of all other Central Asian Republics put together. On this count therefore, the region does not carry much weight or influence. Russia's population is also steadily declining and by 2030 its population is expected to be half of Pakistan. Even its military-industrial complex is in decline with the gradual decrease in China's dependence on it.

* The Central Asian states are leveraging China economically, Russia militarily,
and they are also leveraging the US. This therefore, debunks the idea that
the region is the exclusive sphere of influence of Russia and China.
Lastly, one needs to factor in the rivalry for energy sources of the region. There
is bound to be immense competition between Russia, China and the US on the
question of who will control the oil and natural gas resources of Central Asia.

* The SCO is clearly a Chinese vehicle for furthering China's interests in the region. While the Chinese favor multipolarity on a global scale, they want to retain their domination within the region. Additionally, as far as the economy goes, every single relationship in the region is bilateral and has nothing to do with the SCO.

* The SCO is a threat-led, not goal-led organization, as goals also emerge from threats. In light of China's rapid economic growth and Russian resurgence, is there a likelihood of a bipolar reordering of the world, especially as America's strength and interests get diluted?

* The organization is a laboratory for working out relations that are not bilateral in nature. It is an interesting experiment in the exercise of soft power.

* The nature of the SCO is not as benign as the presentation makes it out to be. The composition of the SCO itself discredits the idea - it is led by two heavy weights with four other, much smaller states as members. The entire rationale of the SCO is to keep the US out of the Central Asian region. And it seems unlikely that India will be willing admitted to the SCO as an equal of Russia and China.

* How are the Asia-Pacific region and the international system as a whole going to evolve in future?

* The Chinese domination of the SCO is likely to become more problematic in the days to come, especially in view of its growing economic and military might. There is a distinct possibility of a growing Chinese hegemony; the signs of which we are already witnessing today - China is selectively targeting some of the energy-rich countries (Venezuela, Angola, Sudan) and regions and engaging with states which the West would be loathe to associate with because of the concerns for human rights violations in these countries. However, the more threatening China becomes, the greater will be the likelihood of the emergence of a counter-balance.

* Despite the relatively low population figures in Central Asia, the region is rich in energy resources, which is what makes it so important. It is true that Russia's industrial-military complex is eroding and is a wasted asset.

* Even within multilateral cooperative structures, one may find several bilateral initiatives. This however, does not invalidate strategic partnerships. The SCO must be judged on the basis of its achievement of the goals that it has set itself, and on that count the organization has done well for itself.

* The view that security arrangements are driven by national interests alone, stems from a realist, realpolitik worldview. But there are other, more appropriate ways to understand security alignments as well. Liberal institutionalists and constructivists for instance, would argue that ideology and cultural values (such as a shared interest in promoting free trade, liberal democratic values etc.) are just as important in determining the thrust of a security arrangement between states.

* The US has entered a phase of relative decline which will continue for a while. To understand the likely developments in the international system, one can look to the arguments put forth by Parag Khanna, who argues that there will emerge three power centres in the future - the US and its satellites; the EU; and China, with their respective spheres of influence.

* Aligning with China through the SCO framework was a tactical move on the part of Russia to ally with a putative challenger. It was wiser to cooperate and have open relations with the adversary than find itself in confrontation or competition with it.

* The SCO is a security provider for the twenty first century, for it encompasses not only traditional, but also non-traditional security threats including environmental concerns and separatism, which is a problem confronting Asia.