Russia expected to be third largest global market by 2012 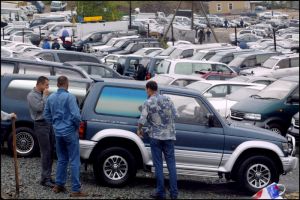 The economic fallout put an end to those predictions, with Russia suffering just as badly - and if you include the oil sector, some would say even worse - as any other economy. But even though sales are down, Frost & Sullivan predicts that Russia could rebound to be the world's 3rd largest auto market by 2012, behind the U.S. and China.

The prediction is based on steps Russia is taking to strengthen its automotive sector: it is increasing import tariffs and limiting the importation of used cars. The new importation law, similar to one recently passed by Bolivia, reduces the maximum allowable age of an imported car from 7 years to 5. Russia is also reviewing bank lending practices, since the money it flushed into the economy hasn't really had an effect on loan availability yet (not unlike the U.S.).

Lending and the size of the import tariff that Russia imposes seem to be the most important factors in making this prediction come true. But one thing not mentioned in Frost & Sullivan's forecast was oil. When the world economy gets off its knees, the price of oil is going to head for the moon again, and "expensive" oil means more Russians with money, and that could mean a return to more sales, provided the country's oil barons share the wealth. You can read the full press release after the jump.

LONDON, Jan. 19, 2009 — Despite the global concerns about the impact of the economic recession, Frost & Sullivan predicts that by the end of 2009 the Russian automobile industry will be stable and lucrative once again. By 2012 Russia's car market is even expected to be the third largest in the world, behind the US and China.

As experts predict a continuation of the economic recession into the beginning of 2009, industry stakeholders are watching the Russian automotive market's performance closely. On November 18th 2008, Dmitri Medwedew, the President of the Russian Federation, acknowledged that the crisis is spreading from the financial sector into other sectors, including the automotive industry. Recent analysis from October 2008 to November 2008 shows a 19.3 percent drop in sales of new foreign passenger cars. In response to this the government is re-thinking its lending policies, automobile import policies, and import tariffs, while major Russian manufacturers are restructuring the number of work days in a week and reducing its workforce.

"As soon as the Russian banking sector overcomes months of financial turmoil, and automotive loans are available again for Russians, then sales of passenger cars are expected to revive their growth, however, most likely, at a slower pace," points out Andriy Ivchenko, Industry Analyst at Frost & Sullivan.

Before the recession hit, the Russian economy was fertile for investment. By the end of 2007, Russia ended its ninth straight year of growth, averaging 6.9 per cent annually since the financial crisis of 1998. In 2007, foreign investments in the Russian economy amounted to $27.80 billion of which $353.0 million were invested in automotive and transportation machine-building sector.

The problem for the automobile industry is rooted in the lending policies of Russia's and the World's financial institutions and banks. These lending policies are being revived, but only after taking a toll on Russian and foreign automakers alike.

"Given the fact that more than 45 per cent of the passenger car sales in Russia were financed through bank loans, the financial crisis in Russia forced banking system to almost put on hold all new automotive loan applications for Russians," says Olha Kryvetska, Research Analyst with Automotive & Transportation Practise at Frost & Sullivan.

This new slump in demand for cars forced the hand of many Russian and foreign manufacturers, namely GAZ, AVTOVAZ, KAMAZ, the biggest Russian manufacturers. On the 19th of November GAZ announced its decision to install a three-day working week, in response to decreasing demand for vehicles. On the 9th of October KAMAZ, known for its heavy commercial vehicles, it was cutting down the work week to 32 hours, and also cutting its workforce by 10 per cent. Even though, most of 2008 showed a slight reduction in sales (only 2.6 percent compared to last year), AVTOVAZ's Lada Priora has shown positive tendency increasing its sales drastically in 2008. Foreign OEMs, such as Renault, Ford and GM are amending their production plans for January 2009 in Russia and delaying their production of new models.

Finally, the government is starting to act in an effort to keep the industry afloat. The main change is the restructuring of import policies of used vehicles, prohibiting the importation of cars older than 5 years. Currently the system allows for cars no older than 7 years. The other key adjustment is to increase import tariffs. Russia is hopeful that this move will reduce the volume of import and in the long term gradually accelerate the development of foreign assembly in Russia.

Once the Russian automotive industry is strengthened, through new lending policies, import tariffs and the stimulation of foreign assembly, the future of this industry looks bright.