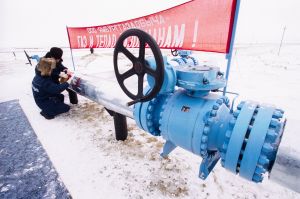 Apart from Russia, there are only two countries on the Caspian Sea's western shore through which gas and oil can flow to Europe. Iran is clearly out, at least for the time being. That leaves Azerbaijan, a country with large oil and gas reserves of its own. In the two decades since the Soviet collapse, Azerbaijan has only had two leaders: a former KGB general and now his son, who was elected president in October with a comfortable 89 percent margin.

From Azerbaijan, energy can flow westward only through Armenia or Georgia. But since Azerbaijan and Armenia have been at war for years over Nagorno-Karabakh, that leaves only Georgia. That fact fed Georgian President Mikheil Saakashvili's exaggerated sense of self-importance, which played a major role in Tbilisi's disastrous August war. Russia's incursion made the following points clear about Georgia: It still belongs to Moscow's sphere of influence, it should be kept out of NATO, and it is an unreliable energy transporter.

From Georgia, energy can move to the country's Black Sea port or on to Turkey. But the next alternate pipeline, the Nabucco, is already caught up in Turkey's increasingly unlikely bid to join the European Union.

Paradoxically, as Washington advocates energy diversity for itself, the United States and NATO are almost entirely dependent on Russia for fuel supplies to fight the war in Afghanistan.

In reality, even before the inauguration, Obama was in close contact with General David Petraeus as he traveled to Kazakhstan, Kyrgyzstan, Turkmenistan and Tajikistan to secure air, trans-shipping and refueling rights and to shore up an existing base now needed because of attacks by militants on the Khyber Pass, which links Pakistan and Afghanistan.

The Afghan campaign puts the United States and NATO in bed with regimes whose human rights records can be described as various shades of abysmal. But both sides found a way to save face: Most of the shipping will be handled by private commercial companies, meaning that the Central Asian nations aren't really dealing with U.S. imperialists, who aren't really dealing with dictators.

Dmitry Rogozin, Moscow's envoy to NATO, says Russia supports NATO in Afghanistan because a NATO defeat there would mean a "strengthened enemy [Islamic extremists], emboldened by success, standing on the threshold of our home." James Appathurai, NATO's chief spokesman, has said that despite other arguments with Russia, "this area of cooperation has been walled off and preserved."

But any wall can fall. Look at Berlin. And Rogozin exaggerates the danger that a NATO defeat in Afghanistan would pose to the Kremlin. And in Chechnya, Russia has already demonstrated it is able to deal with these types of threats.

Russia is most vulnerable to Islamic nuclear terrorism. The nuclear material is already there and need not be transported across borders. In reality, aiding NATO and Washington can only make Russia more susceptible to such terrorism.

Dependent on Russia for fuel, partnering with despots, Obama will enter a land of warlords and poppy fields — a graveyard for invaders for centuries. He will need to be very smart, very careful and very lucky.

Richard Lourie is the author of "The Autobiography of Joseph Stalin" and "Sakharov: A Biography."