The problem of space junk 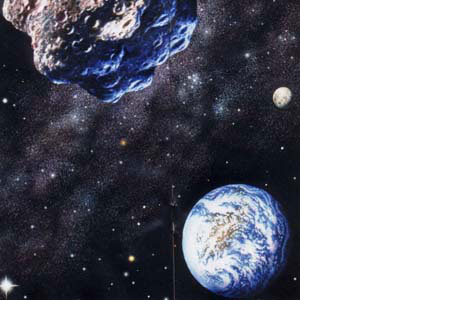 When it launched its first satellite, humankind not only opened a window on the Universe, but also unveiled a sort of garbage chute, which is quickly turning near-Earth space into a gigantic waste dump filled with space and rocket debris.

At altitudes of 200 kilometers and more, we find the last stages of launch vehicles, booster sections, nose cones and decommissioned and retired satellites. Add to that the ruins of exploded spacecraft, household refuse from manned craft and orbiting stations, and such "smaller items" as bolts, washers and even tools lost by astronauts as they work outside their craft.

Near-Earth space contains about 26,000 large man-made objects and three to five times as many small elements (assembly units, jettisoned cover lids, etc.). They constantly collide with each other, and each such collision increases the number of fragments by several times.

For now only two countries - Russia and the United States - monitor space for man-made garbage by using their radar and optical equipment. Officially, about 10,000 objects, with a minimum size of 10 centimeters to 30 centimeters in low orbits and about one meter in geostationary ones, are itemized, i.e. monitored regularly, entered in special catalogues and identified as to their origin.

The total number of discovered and monitored pieces with a diameter of more than 10 centimeters is approaching 14,000. Something like 950 of them are functioning satellites from different countries. The number of bodies up to 10 centimeters in size has reached 200,000 to 250,000; between 0.1 centimeter and 1 centimeter, 70 million to 80 million; and a few microns or less, on the order of 1013-1014. But these last figures are only estimates, because such particles are beyond the observational powers of telescopes and radars and cannot be catalogued.

A piece of space junk half a millimeter across flying at a speed 10 to 20 times that of a rifle bullet can easily pierce an astronaut's suit. A particle more than one centimeter in size that strikes an active satellite can disable it. Collisions with large man-made space objects are unlikely, although things like that have happened. In July 1996, for example, one of the fragments of a French Ariane rocket's last stage hit and damaged the French satellite Ceras by rupturing its gravity stabilization bar. In January 2005, the last stages of two launch vehicles, one from the United States and one from China, collided, although they were launched in different years. In the 15 years that it existed, the Soviet Mir orbital station saw several substantial man-made space bodies approach it within one to three kilometers.

In June 1999, the International Space Station, not yet manned, came close to hitting the fragment of a booster. In 2001, the ISS had to carry out a special maneuver to avoid a seven-kilogram piece of metal lost by astronauts during an extra-vehicular activity.

Accumulation of space debris is also increasing radiation levels in the near-Earth environment. In its day, the Soviet Union launched 33 spacecraft with nuclear power units aboard. After fulfilling their missions, the units were jettisoned from the satellites and put in the so-called burial orbit (700 to 1,000 kilometers). There, their cores, consisting of fuel clusters, were jettisoned in turn.

Currently, 44 radiation sources from Russia are parked in the burial orbit. They are: two satellites with unseparated nuclear power units (Cosmos-1818 and Cosmos-1867), fuel assemblies and 12 closed-down reactors with a liquid metal coolant, 15 nuclear-fuel assemblies, and 15 fuel-free units with a coolant in the secondary cooling loop. They are to spend no less than 300 to 400 passive years in the orbit. That is enough for uranium-235 fission products to decay to safe levels.

The United States is another contributor to the high levels of radiation in near-Earth space. In April 1964, its Transit-SB navigation satellite with a radio isotope generator aboard failed to enter orbit and broke into pieces. While burning up in the atmosphere, it scattered about a kilogram of plutonium-238 over the western part of the Indian Ocean north of Madagascar. The result has been a 15-fold increase in background radiation around the world. A few years later, the Nimbus-B weather satellite with a uranium-235 reactor crashed into the Indian Ocean. Today, there are seven American radiation sources circling the Earth in orbits ranging from 800 kilometers to 1,100 kilometers, and two more in near-geostationary ones.

The lurking threat of both Russian and American nuclear satellites is that, should they fall apart upon collision with space debris, vast expanses of near-Earth space would be contaminated. Additionally, if some of the fragments had a velocity after collision and destruction that was below orbital speed, they would fall out of orbit and pollute some parts of the Earth's surface. In the worst-case scenario, the atmosphere could be heavily contaminated.

Now that we have ascertained the threat, it is necessary to think of ways to confront it and, if that is impossible, to deal with its effects. For a start, it is important to cut the number of craft launched by increasing their useful life and using multi-purpose satellites. Once they have served their purpose, they can be brought to the denser layers of the atmosphere using their remaining fuel, where they will burn up, or enter less "populous" orbits. The second option is preferable. The satellite cemetery is expected to lie 200 kilometers to 300 kilometers above the area of geostationary orbits.

Directly cleaning up accumulated garbage from near-Earth space appears problematic for the foreseeable future. One idea is to use lasers. But complete evaporation of even a relatively small bit of substance would require considerable energy. Besides, some of the materials exposed to laser action will simply break up into smaller pieces, increasing the total number of fragments. Lastly, this method is dangerous because it releases enormous energy into the environment. This energy might not only upset the environment's heat balance but also alter its chemical composition.

Unfortunately, no effective practical techniques exist today to protect against space pollution at altitudes higher than 600 kilometers, where the cleaning-up effect of atmospheric drag on a satellite is absent. On the other hand, the piling up of man-made debris in space poses the threat that once some critical level is achieved, an avalanche-like build-up may begin as pieces of rubbish start multiplying in mutual collisions.

After a time this may make working in space impossible.

Yury Zaitsev is an expert with the Space Research Institute of the Russian Academy of Sciences.