A job stimulus program - will it be effective? 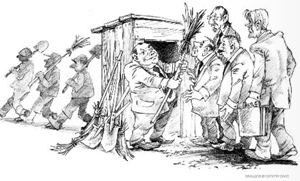 To stimulate employment and the economy, the government will give 60,000 roubles ($1,700) to unemployed Russians as startup capital to open small businesses. In addition, the government will provide subsidies to companies to put employees facing imminent layoffs through re-education and training programs. Other workers will be paid to relocate to areas within their regions where jobs can still be found.

According to the government officials, these and other measures aimed at fighting the country's billowing unemployment rate would be implemented soon in the five regions that had most quickly offered proposals for the federal government's 43 bn rouble ($1.3 bn) employment-stabilisation package: Krasnoyarsk, Yaroslavl, Tatarstan, Tyumen and Bryansk.

"Now it [unemployment] stands at 5.8 mn [people]. It is difficult to forecast, but I think it could reach around 7 mn by the end of this year," said Deputy Health and Social Development Minister Maxim Topilin.

The number of unemployed workers rose by 1 mn from September to December, now making up 7.7 pc of the work-age population, according to the State Statistics Service, which calculated its figures using the International Labor Organisation's methodology.

The federal government will subsidise 95 pc of each region's employment program, but the regions must come up with the remaining 5 pc and adjust their 2009 budgets accordingly.

Medvedev told regional authorities at a conference in January that "job security is one of our top priorities, one of the government's principal social obligations".

The employment-stabilisation program is made up of four components - public works creation, specialist training and workforce re-education, job relocation assistance and small business development. The government's aim is to create at least 901,000 jobs, including 700,000 new temporary positions across the country and 50,000 new jobs in small business. It also will offer professional development and training programs for 114,000 workers facing imminent layoffs; give companies subsidies to pay for the employment trial period for 10,000 new university graduates; and subsidize the costs for 27,000 people to move to work in another area of their region.

A large portion of the temporary jobs the government aims to create will be in the area of public works, including infrastructure and municipal services projects such as road building and the painting and cleaning up of schools and hospitals.

For small business, the government will give 60,000 roubles to a target number of 50,000 unemployed Russian citizens to open their own enterprises.

"It is well-documented and proven that subsidising jobs is not an effective method of job creation," said Vladimir Gimpelson, director of the Higher School of Economics' Centre for Labour Research. "When the subsidies stop, the jobs go too." Alexandra Eftivyeva, chief economist at VTB Capital, said the best way to support employment was not to directly support people but to help their employers "restore their working capital credit".

Vladimir Gimpelson, director of the Higher School of Economics' Center for Labor Research said it would be difficult to find jobs. He compared Russia's labour market to an ocean with two islands: a "vacancy" island and an "unemployed" island. -