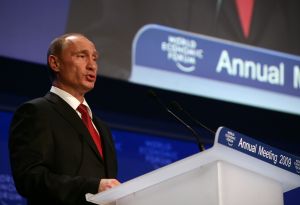 The last Davos forum was special, mainly because although it took place against a backdrop of all participants demonstrating a general understanding of the seriousness of the economic situation, the world has not actually taken any steps towards practical actions to counter the world economic crisis.

There was a great deal that made sense in the speech by Russia's Prime Minister Vladimir Putin. The points he made about the need to write off bad debts and toxic assets and to get rid of virtual money were indisputable. And no one actually did dispute this. The leaders of other countries agreed, and also made some very fair comments. Germany's Chancellor Angela Merkel talked of the need for far-reaching structural reforms, the British Premier Gordon Brown spoke about the need for increased coordination of efforts to combat the crisis, US ex-President Bill Clinton lamented the fact that America did not have a clear economic programme, and so on.

Of course, no one expected that Davos would see any important decisions taken. Everyone understood that this was not the place or the event where anything like that was possible. However, hardly anyone came up with concrete proposals which would finally make it possible to move from correct statements to the development and implementation of a programme to tackle the crisis. Probably the only exception was a range of proposals from Angela Merkel: to set up a UN Economic Council and to sign a global economic charter - an agreement between states to observe certain principles which would prevent a repeat of the current crisis.

Mrs Merkel's proposals are up for discussion, and they should indeed be discussed. But first it's important to understand the present crisis, and only then to work on creating a global financial system able to protect us from a repeat of anything similar in the future.

Going back to what the leaders of the "G20" countries agreed in Washington in mid November 2008, the results of the Davos forum prompt us to admit that the world has made virtually no progress in organising effective anti-crisis action. It's no surprise that overall the economic crisis is continuing to escalate.

Some of the mistakes are strategic in nature. We only have to look at the approach to solving the problems of bad debts and toxic assets. In most countries, including the USA, Russia and others, we frequently see toxic assets not being written off but instead being replaced with government cash. As a result, financial aid by governments is running into many trillions of dollars without the situation getting any better. State aid is proving to be sporadic and unreasonably expensive.

Protectionism is growing in strength. In general, even from the point of view of logic, protectionism is a bad way of trying to combat the crisis. Indeed, everyone recognises that the present financial and economic crisis is global. But if it's a worldwide crisis, which is hard to deny, if it is indeed global, then the most effective way out must lie in joint efforts. In this case, protectionism is the last thing we need.

Obvious as it is, the fact that the Washington declaration recognised this was rightly seen as extremely important. The leaders of the most developed countries, who signed the declaration, pledged to "refrain from creating new barriers for investment or services". Sadly, they don't seem able to refrain from this.

In January 2009 the European Union announced the introduction of duties on steel from Moldova (4%) and China (25%). Russia has decided to increase its import customs duties on motor vehicles, and the USA is planning to bring in duties on Italian mineral water and French cheese in response to restrictions on imports of American meat into the EU. Examples are plentiful. One thing is clear: everybody agrees that protectionism is evil, but increasing numbers of countries are resorting to it in their effort to tackle the crisis.
This problem can be seen from two angles.

First, it is naïve and rather short-sighted to think that bringing in prohibitive import duties cannot but benefit your own producers and consumers, if only because your foreign trading partners will respond in kind.
Secondly, protectionism is a barrier to investment. This is very significant. It's already the case today that investments are awaiting the moment to come down from the shelf. And make no mistake, they will go most of all to the places that guarantee free trade. If everyone abandons the guarantee of free trade, those investments will stay frozen.

The onset of the Great Depression in the USA was hugely accelerated by the passing of the Smoot-Hawley Tariff Act in 1930. The US government used this law to protect its domestic producers by bringing in high customs duties on imported goods. The Americans' purchasing power fell still further, and other countries introduced counter-measures. That was one of the reasons why the way out of crisis in the 1930s was so painful for the world. It's a shame the world forgets its own history.

What needs to be done? First, we simply need to move from words to deeds. Most of all we need to convene a special international conference of heads of state, to sign binding documents. There are precedents in world history, of many different kinds: the Bretton Woods conference (1944), the Conference on Security and Cooperation in Europe (Helsinki, 1973-1975), and others. The gravity of the situation compels us to act quickly and effectively. Otherwise, the way out of this crisis will be a long and painful journey.