No silver bullet for Afghanistan 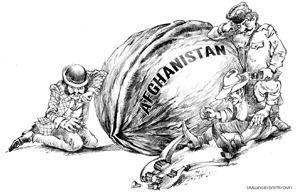 In the 30 years that followed the deployment of the Soviet troops in Afghanistan in December 1979, tons of publications were released in the former Soviet Union and later Russia about this war. Actually, the taboo on critical evaluation of the "internationalist aide mission', as the action was originally described, was lifted as early as in 1986, when Mikhail Gorbachev started perestroika and the new Afghan pro-Soviet leader, Mohammed Najibullah, was urged to pursue "reconciliation policy towards the Mujahideen. Even though the Soviet experience in Afghanistan could serve as a valuable pool of knowledge for the Western experts, it gets so far little attention in the West.

Why? Probably, because it can destroy some of the simplistic views on the nature of the Soviet leaders' decision to go into Afghanistan. It has been simply described as one of the death throes of the collapsing Communist regime, an "occupation" and an "aggression". In the same way, until his tragic death in the hands of the Taliban in 1994, Najibullah was described as a Soviet puppet and the last block on the way to freedom. The latter was expected to be provided by the "freedom fighters" as the anti-Soviet Mujahideen were referred to by the Western press.

The victory of Taliban and its subsequent alliance with al-Qaeda, with both of them inheriting the American-made weapons and the American-trained "experts" on car bombs from the anti-Soviet Mujahideen, further complicates the story.

So, what lessons can be taken from the Russians' experience in Afghanistan? The first lesson is simple - not to invade Afghanistan. Despite general respect for the Soviet military and civil personnel working in Afghanistan, there is a consensus in Russia that the deployment of troops there was a mistake. The fateful decision of Politburo members Leonid Brezhnev, Yuri Andropov, Dmitry Ustinov and Andrei Gromyko to topple Afghanistan's leftist leader Hafizullah Amin, whom they suspected of being a CIA agent, was obviously based on wrong information and led to tragic consequences.

However, as more facts come to light, the motives of the Soviet leadership prove to be more complicated than a simple desire to expand the "Soviet empire".

"I had an impression that they were provoked into invading Afghanistan, that they took the bait," the late Yuli Vorontsov, the last Soviet ambassador to Afghanistan in 1988-1989, told me in an interview two years ago. "Someone made them believe that Americans could invade Afghanistan from the south, using Pakistan as a launching pad for their invasion. So, the deployment of troops was intended as a sort of a pre-emptive action."

To prove his theory, Vorontsov cited the presence of several Soviet anti-aircraft military units near Kabul until the end of the war. "The Mujahideen did not have any aviation, except maybe hunting falcons. So whom do you think they expected to attack us from the air?" Vorontsov asked.

"Of course, Americans. The Politburo members had a vague idea about Muslim fundamentalism. But they inevitably took a fighting stance whenever they heard of Americans doing anything anywhere, especially in the Soviet Union's soft belly, as Afghanistan was perceived by them."

Later, Zbigniew Brzezinski, President Carter's National Security adviser, admitted that "inducing the Soviet intervention "was a knowingly pursued policy of Carter's administration." That secret operation was an excellent idea. It had an effect of drawing the Soviets into the Afghan trap, "he said in an interview to Le Nouvel Observateur in 1998.

The subsequent events and the plight of the Nato coalition in Afghanistan have proven that the Soviets were not the only ones (and not the last ones) to be trapped. The second lesson to be learnt is that acting in Afghanistan alone, without the broadest possible international coalition, is certainly a bad idea. This lesson from the experience of the Soviet leaders which tried to "civilize" Afghanistan on their own obviously went unheeded by the leaders of the Nato coalition.

First, the United States wanted to rebuild Afghanistan alone, later it invited European partners, but they never made a serious effort to engage Russia in the process.

"Many times Russia suggested to the Western donors that part of the money channelled to Afghanistan should be spent on re-launching some of the old Soviet projects, including a construction plant there," said Zamir Kabulov, Russian ambassador to Afghanistan. "Since Afghans have an experience of working there before, this is a way of providing the Afghans what they need most - employment. But the Western leaders insisted on building modern factories, where Afghans simply can't work."

Now Kabulov says that Taliban, according to his estimates, controls a larger and larger part of the country, while the Americans are bracing up for an operation against Taliban's supporters in the "tribal areas" of Pakistan. This way, the third lesson may go unheeded - the lesson not to broaden the zone of conflict and not to touch the bellicose Pashto tribes.

If things continue developing in the same way, the Nato coalition may end up with learning the last Soviet lesson - when you decide to leave, make your exit from Afghanistan a negotiated one. Otherwise you can be destroyed on your way out of the country.