There is no island of stability today. Let's work for tomorrow 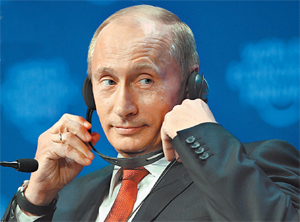 In his Davos speech, Putin compared the global crisis to a "perfect storm", which had drew Russia, among other countries, into its eye. And the paramount question in everybody's mind was whether it would be possible to escape the raging elements, and at what price.

In the film The Perfect Storm, the captain of a fishing boat, in pursuit of a fast buck and ideals of sea-faring honour, perishes in an unprecedentedly violent storm, taking his vessel and the crew with him. Vladimir Putin presented a different approach: economic policy has to be flexible. Government intervention, he said, has its limits, and only efficient businesses should be supported afloat. This approach would help the Russian economy to exit this perfect storm in better shape.

Time to cool down
Vladimir Putin set the tone for the 2009 World Economic Forum in Davos by avoiding contentious issues.

"Many expected Putin to give another Munich-style address, but it never came. It is time for everybody to cool down and work together," said Stanislav Voskresenskiy, Russia's deputy economic development minister.

Igor Shuvalov, first deputy prime minister, says it is important that Putin did not criticise the USA on this occasion, "and his wishing good luck to the new Obama administration is a positive signal".

Moscow's suspension of Iskander missile deployment to Kaliningrad immediately after the prime minister's Davos speech put an additional emphasis on the Kremlin's intention to extend a hand to the new US government.

The crisis, therefore, has helped to bring the global players together in the face of a common threat.

All Putin's remarks in Davos came down to one point: encouragement for Western investors to do business in Russia. For instance, when asked about Russia's investment attractiveness, Ernst & Young CEO James Terly said that, in spite of bureaucratic hurdles, "there are many more positive things about doing business in Russia".

Ironically, the economic downturn may even enhance Russia's appeal to investors, simply because government intervention is in fact diminishing. The "perfect storm" is forcing the government to be thrifty with its resources.

"We now interface with companies on a daily basis. These conversations may have made some managers think that the government is going to bail them out anyway.

"But we have no such plans. We can help, but only those who have a focused action plan to address the crisis," stressed Igor Shuvalov.

Liberal noises
The new trend probably explains the liberal tone of Putin's speech in Davos: government should not intervene in the economy. Until now quite the opposite has been the case. The prime minister's message has so far failed to impress the Russian markets, accustomed as they are to injections of public cash.

No stoking fears or scaring the public
Likewise the reassuring statements from the Russian government about the rouble's stability. Almost as soon as Putin left the stage in Davos, the rouble took a nosedive.

German Gref, chairman of Sberbank, Russia's biggest state bank, responded that it would be better not to "stoke fears" and "scare the public". "If the exchange rate is as much as 35 or 36, or even more, roubles per dollar, then this reflects the real situation. It is occurring, though, within the limits set by the Central Bank. Anyway, people no longer expect a deep devaluation. Investors just want to squeeze out their business-plan margins and win some of their own back on the foreign exchange markets. In any case, I see nothing alarming in what has happened."

All things considered, Russia's place in the world depends solely on how well it fares in the aftermath of the global economic crisis. Admittedly, there are few reasons for optimism. There are still gold and currency reserves, but are they adequate to match the magnitude of "the perfect storm"?

The island of stability is nowhere to be seen
The crisis has exposed fundamental (not uniquely Russian) problems in the economy. It is absolutely clear that institutional reforms in Russia are incomplete. In fact, both business and government have been dazed by the economic downturn, and have not gone beyond treating apparent symptoms. Now the rouble needs to find its floor, which will provide the economy with a clear benchmark.

Nevertheless, this inability of the high and mighty - no matter what country they represented - to propose a remedy for abating the perfect storm, was the principal outcome of the Davos Forum. The island of stability is not looming on the horizon. Not yet.