Taking the lies out of the myths 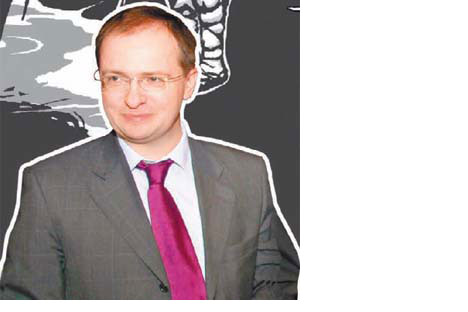 Professor and politician Vladimir Medinsky has explored negative stereotypes surrounding Russians, such as laziness, brutality and drunkenness. His books sparked vicious debate. Medinsky believes any myth, especially a negative one, is a ticking time bomb on the national conscience.

Where do myths about Russia come from and when did they emerge? Why has Russia been so unlucky?
It is true that all nations and countries tend to embellish their own history and there is nothing wrong with that. By contrast, dirty myths are purposely forged as an instrument of political propaganda or psychological warfare against certain countries. And no other nation in history has endured such prolonged demonisation: this smear campaign has been going on for more than three centuries. Everything in Russia is either bad or wrong - dreadful roads, endemic alcoholism and idleness, corruption and pilfering, mud and poor sanitation, and an inherent lack of democratic culture, deriving from an age-long tradition of despotism. To substantiate the myth of"the Russian threat "Russians are presented as intrinsically aggressive. All these myths began to emerge when Russia came to the fore as an increasingly important actor in European and global politics - in the 18th century, at the time of Peter the Great and the rise of the Russian Empire.

Are you saying that this "cold war" with Russia began during Peter The Great's rule? Isn't that quite an extreme view?
It seems so. For example, a secretary to the Austrian embassy, Korb, wrote a spiteful lampoon against the young Moscow state, cunningly passing it off as the Ambassador's diary. This "diary" went into wide circulation throughout Europe. Why? Because those countries saw a new power rising in the East and, to quote Prince Golitsyn, they hastened to scorn us as barbarians.

Maybe the essence of the problem was not people plotting against Peter's Russia. You have advanced a profound theory, which suggests the reason was closer to home. Your conception makes much more sense: Russians have themselves have adopted those Western myths.
I am afraid that, to some extent, it was an outcome of Peter's reforms - for example, his famous decree to have beards cut off. Upon his return from Europe, irritated by the thought that everything in Russia was inferior to everything in Europe, he ordered people to wear European clothes. Such disrespect for the Orthodox tradition of that time censured a shaved chin as something devilish and notoriously Western, let alone Peter's insistence that the church abolish the Seal of Confession. This didn't hap-pen, but the Emperor's interference triggered a profound schism within the church. In fact, the nation was split into two subcultures, if not two separate nations: Peter ordered half of the people to be European, while the other half remained in a primordial state.

By saying that, you prove that making Russians into Europeans brought progress, taking Russia out of its primordial situation. But it's still not clear on what grounds these Russian myths appeared.
When a national body is split, schisms will develop - Westernisers and Slavophiles, liberals and radicals. Elite Russians became what emigrant philosopher Ivan Solonevich justly called a "foundling class" a kind of cuckoo's nestling planted in a songbird's nest. It was this group which first propagated those dirty myths about Russia, as if disassociating themselves from its "abject people" Their modern followers are our new oligarchs, splashing money about in the West, and new liberals decrying "unwashed Russia" at every international conference.

And what about so-called Soviet unity? Whatever we make of the Communist experiment in our country, it was an attempt to "unite people" on an entirely new basis. Didn't we live for more than seven decades in a society and culture founded on the worker-peasant relationship? Apparently, the gap between rich and poor in the USSR was substantially narrower than modern times.
Yet the cultural gap only widened. Bolsheviks cast off all the achievements of Tsarist Russia. Historical continuity broke again, myths about "savage Russia" were revived, all that was sacred in the country was profaned - all done with our own hands and not anybody else's. Remember Lenin's famous statement: "Russia is the prison house of nations."
In the late 1980s, the onset of perestroika brought a fresh wave of dirty myths about Russia that washed away whatever was good in our history, exposing only vices. We started blaspheming the historic experiment that was the USSR, as well as ourselves as the creators of this experiment. The problem is with us. I am sure that if we do not squeeze out the poison of dirty myths, they will be passed on, like a baton, to future generations.

RN Dossier
A year ago, OLMA Media Group published Medinsky's Russian Drunkenness, Laziness and Brutality. (First edition: 3,000 copies. Second edition: 150,000 copies.) His second book in the "Myths about Russia" series, called Russian Slavery, Mud and the Prison House of Nations, also received much acclaim. Nearer the end of the year the third book came out, Russia's Own Way, Pilfering and Long-suffering. In these books, the author argues that none of the above mentioned is necessarily an inherent property of the "mysterious Russian soul". Medinskiy says he is out to challenge negative stereotypes about Russia, particularly those shared by his Russian readership.

An extract from Medinsky's 'Russian Drunkenness, Laziness and Brutality'
Drunkenness isn't a Russian problem - it's a global problem. In the 19th century the temperance movement grew throughout the world, but the interesting fact is that it started in Russia before anywhere else, in 1858-59. Thousands of villages and hundreds of thousands of people decided to close down local drinking places and held meetings where they took the pledge: not one glass. And they stuck to this rigorously. Local officials who paid for the right to collect taxes reduced the price of vodka and provided free buckets of spirits, but the peasants stood firm. In May 1859, widespread destruction of drinking establishments began. So the "ethnographic" inevitability of Russian drunkenness proved to be a myth. By 1914 there were 400 temperance societies in Russia, made up of workers, peasants, craftsmen, doctors, clergy and teachers. It's difficult to establish the ratio of drinkers to non-drinkers at that time, but the famous Russian chemist, Mendeleyev, believed that 40pc of Russian peasants did not touch wine at all, except perhaps when raising a glass on saints' days.

This discussion will be continued in forthcoming editions of Russia How. We would be happy to hear from you: what are your perceptions of Russia and Russians? Do these stereotypes correspond with reality?