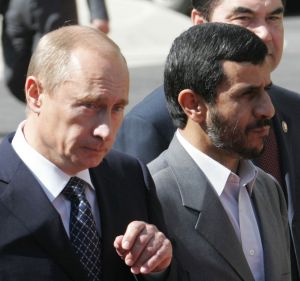 But his administration may have exaggerated expectations about what Moscow can, in fact, deliver on the issue, Russian security analysts say.

Obama said this week that a secret letter sent to President Dmitry Medvedev three weeks ago expressed his readiness to discuss both missile defense and Iran's nuclear ambitions with Russia.

But beyond its veto power in the UN Security Council, Russia actually has little leverage in preventing Iran from developing a military nuclear program, said Alexander Khramchikhin, a prominent researcher with the Institute for Political and Military Analysis.

"Veto power in the security council is the only, and very limited, means Russia has to influence Iran," Khramchikhin said.

So far, Russia has primarily used its veto power in the council to block or soften international sanctions advanced by the United States against the Islamic republic.

Washington suspects Iran of developing nuclear technology for military purposes, while Tehran maintains that it needs nuclear power for energy. Russian and Iranian officials last week launched a test run of the Bushehr nuclear plant in Iran, which was built by Russia.

Russia's arms sales to Iran have also been a contentious matter among U.S. and Israeli officials.

Washington would like to see Russia back out of a contract to supply Iran with S-300 long-range surface-to-air missiles that could dramatically reduce the effectiveness of possible U.S. or Israeli airstrikes against Iranian nuclear targets, said Vladimir Yevseyev, a security analyst with the Institute of World Economy and International Relations at the Russian Academy of Sciences.

Russia had initially agreed to sell Iran the missiles, which are capable of tracking simultaneously up to 100 targets while engaging 12 at a range of up to 200 kilometers and a height of up to 27 kilometers.

But Anatoly Isaikin, head of state arms monopoly Rosoboronexport, said last month that a political decision from the Kremlin was needed before proceeding with the missile deliveries, which U.S. and Israeli officials have fiercely opposed.

And with the deal effectively frozen, the deliveries are not much of a lever for Moscow to persuade Iran to halt its nuclear programs, said Khramchikhin of the Institute for Political and Military Analysis.

Both Yevseyev and Yevgeny Satanovsky, president of the Institute of Middle Eastern Studies, said neither Russia nor any other country would have much success in pressuring an economically self-sufficient Iran, with its rich history and strong Shiite self-perception as God's chosen nation, to abandon its nuclear ambitions.

Only a military operation can stop Iran from going nuclear, and only the United States is capable of carrying out such an operation, Satanovsky said.

"One cannot pressure Iran into doing anything they don't want to, and it is impossible to buy them off," Satanovsky said.

Because U.S. forces would not be able to control Iranian territory following such an operation, Washington could seek Russia's help in ensuring stability in the region following the initial combat phase, Satanovsky said.

Such support from Russia, however, would demand a significant concession from Washington, such as recognizing the former Soviet Union as Moscow's sphere of influence — an issue of much greater importance to Russia than the planned U.S. missile shield, Satanovsky said.

One possible track Russia could pursue in mitigating an Iranian nuclear threat is facilitating a gradual involvement of Iran in maintaining security in the region, said Yevseyev of the Institute of World Economy and International Relations.

U.S. Secretary of State Hillary Clinton said Wednesday that Obama was ready to engage in talks with Iran for the first time since Washington cut ties with Tehran in 1981. "But we want to make sure it's constructive," she told The Associated Press.

She accused the Iranian leadership, however, of promoting terrorism and seeking to "intimidate as far as they think their voice can reach."

If these countries "come in a civilized manner and sit at a negotiating table, then there will be a breakthrough," Soltanieh said, Bloomberg reported.

Analysts say, however, that no negotiations are likely to begin before Iranian presidential elections in June.

Analysts said talks with Iran probably would not start before June, when presidential elections will be held in Iran. Iranian President Mahmoud Ahmadinejad, well-known for his anti-American rhetoric, has said he will run for a second term.