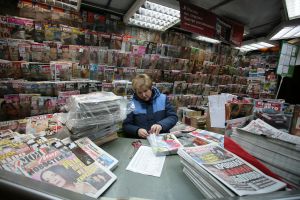 Who will emerge as the winner in the current economic crisis: President Medvedev or Prime Minister Putin?

It is a year since Dmitry Medvedev became President, which has prompted the media to reflect on the shifting balance in the Medvedev-Putin tandem. Nezavisimaya Gazeta sought opinions from several prominent experts. Alexander Konovalov, President of the Strategic Assessments and Analysis Institute, thinks that "with the crisis mounting and living standards falling, people will ask more and more often about who is responsible. Who is to blame? Perhaps, in this situation, one of the top leaders will have to be sacrificed. The members of the tandem do not always see eye-to-eye. For example, Mr Medvedev introduced the practice of weekly television appearances, which evidently goes against the grain with Putin."

The Carnegie Moscow Centre's Alexei Malashenko is sure that "the balance may tip in favour of Medvedev, if only slightly. The tandem is clearly going to be transformed. Decisions will be taken collectively and there will be a personnel reshuffle. Although people talk about two power centres - Putin and Medvedev - a third one should be added. These are the people who reject Medvedev for his mealy-mouthed liberalism and Putin for failing to follow through on his tough line." Mr Malashenko notes that no effective methods are available for combating the crisis: for Russia, the way out is connected with oil prices, over which neither Mr Putin nor Mr Medvedev has any control. "The authorities have to wait until the situation in the US and Europe improves, so Russia will emerge from the crisis with a certain lag."

Political analyst Nikolai Petrov writes that the actions of the country's leaders do not measure up to the challenges. In this situation, "something must be done to make Mr Putin less exposed; all hints that he may be responsible for the negative consequences of the crisis must be eliminated. That can only be done by targeting somebody else instead of him."

Gleb Pavlovskiy, the pro-Kremlin President of the Effective Policy Fund, takes a sanguine view of the tandem's future: "It is very successful, the dialogue between former and current presidents is deepening, and mutual trust is growing. That said, the Kremlin is aware of the dangers of a split at the top. Politically, it might be brought about by several factions in government experiencing stress from underfinancing."

The independent weekly Itogi cites the opinion of Alexei Chesnokov, Director of the Current Russian Political Studies Centre. He believes "the existing configuration of the tandem strengthens the power structure: two heads are better than one. There should be more strong, high-profile politicians at the top. Those who think that, by tradition, everything should be structured focusing on a single figure are seriously mistaken."

US President Barack Obama sent a letter to Russian President Dmitry Medvedev supposedly containing proposals concerning the creation of a new American missile shield in Eastern Europe. Plans to deploy missile defence radars and missiles close to Russia's Western border have been flatly rejected by the Kremlin and constituted a serious irritant to Russian-American relations for many months. Mr Obama's proposal is as follows: the US would renounce deployment of the missile defence system in Eastern Europe in exchange for Russia's commitment to form a common front with the US with regard to Iran and its nuclear programme.

The Russian media have tried to do some thinking for the Russian President and advise him on how to react to the letter.

Izvestia simply quoted President Medvedev: "We do correspond; it would be foolish to deny it. Speaking about trade-offs, that was not on the cards because it is unproductive." Apparently, "the positive signals we have received from Washington" are productive. Mr Medvedev hopes they will be "embodied in agreements."

The tabloid Komsomolskaya Pravda writes: "Russia should not be in a hurry to agree. Given the financial crisis, the US probably cannot afford to deploy radars and missiles in Poland and the Czech Republic, and, if the next US Administration revives the idea of a European missile defence system, whom will we then give up to Washington?"

The pro-government daily Trud cites the opinion of Pavel Zolotarev, Deputy Director of the RAS US and Canada Studies Institute: "the US cannot afford to scrap the missile defence system, as this would be too abrupt a turn in its foreign policy. If such a letter was sent at all, it most probably proposed postponing deployment of the missile defences in Eastern Europe. And in any case, Russia does not want to see a nuclear Iran." The opposition Novaya Gazeta recalls that Russia is completing construction of the Bushehr nuclear plant in Iran and expects to continue building other nuclear facilities there. Meanwhile, "the US and Israel have serious and well-justified fears that the Iranian nuclear programme is aimed mainly at building nuclear weapons".

The independent Vremya Novostei cites Russian diplomatic sources, which deny any bargaining is underway or that Iran and missile defence are linked in Russian-American discussions. "The aim of the letter is to induce Moscow to form a common front against Iran with the US," it quotes the New York Times. An undisclosed source in the Obama Administration described the letter as an ultimatum to Russia to agree to be tough on Iran: "We are telling them to agree or shut up".

The Americans insist the radar in the Czech Republic and missiles in Poland would enable them to intercept Iranian nuclear missiles. Russia is convinced the hypothetical Iranian nuclear threat is but a pretext, whereas, in reality, the Pentagon is trying to gain control of Russian arsenals, writes Vremya Novostei. Moscow believes direct talks between Washington and Tehran could be an alternative to a toughening stand against Iran.

Mr Obama will meet the Russian President in London on April 2 during the G20 economic summit.