Will there be tropical fruits in Siberia within 50 years? 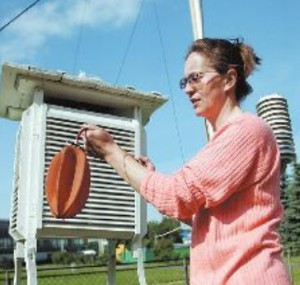 Russian scientists have predicted possible consequences of global warming for Russia, 50 years from now. The first Evaluation Report on Climate Change and its Impact on Russia was presented in February by the Russian Academy of Sciences and the Federal Service for Hydrometeorology and Environmental Monitoring (Rosgidromet).

The report highlights a substantial acceleration of the rise in temperature observed over the last 25 years. The effects of climate change are already obvious in harsh droughts, wildfires and floods all over the world.

Russia, however, has outpaced other countries temperature-wise. Both its Asian and European regions have seen a rise of 0.5-0.6 degrees over the last 10 years, with West Siberia warming up only slightly more slowly (0.4 degrees). An increasingly warmer climate may affect all aspects of our lives. The problem has gradually left the realm of science fiction and became a social, political and economic factor, as climate change exerts a wide-ranging impact on industry, farming, and our everyday lives in general.

"The Russian economy is part of the global economy and if we fail to address this challenge, Russian [food] products will seriously deteriorate and lose out to foreign competition," warns Alexander Bedritskiy, head of Rosgidromet.

Over the next 50 years, the Russian climate will become considerably warmer. The winter and spring temperatures will continue to rise and, as a result, the heating season will be three or four days shorter even by 2015. Experts believe wildfires and floods will become more frequent. Global warming might cause the Caspian Sea to rise and flood coastal towns and facilities.

The report says: "flood risk should be taken into account in long-term infrastructure planning for the Caspian coastal regions in Russia, including Astrakhan, Dagestan and Kalmykia". Scientists remember that the rate of Caspian surface warming soared five- to tenfold at the end of the twentieth century and wrought marked environmental and economic havoc by 1995.

Protracted hot weather carries an added risk of a higher incidence of mosquito and tick-born infections. Yet climate change will bring more than just disease and natural disasters. Studies based on climate models show Arctic melting is very likely to gain in intensity and the polar seas will be completely ice-free during summers in the foreseeable future.

"Some distinguished researchers argue in their papers that this may happen as early as the 2020s,"says Vladimir Katzov, Director of Voeikov Main Geophysical Observatory, which is part of Rosgidromet. "We are already observing a dramatic shrinking of ice cover across the Northern Hemisphere and the Arctic. On one hand, the receding ice will unlock access to offshore hydrocarbon development and make it considerably cheaper. On the other, such serious climate change might jeopardise the Arctic ecosystem."In particular, they will affect polar bears, whose population is already rapidly dwindling.

Scientists are less confident in their predictions regarding the agricultural impact of global warming. Sergey Semyonov, Deputy Director of the Global Climate and Ecology Institute, a think-tank of Rosgidromet and the Russian Academy of Sciences, notes that this depends on precipitation: "If warming is associated with increased precipitation, it will enhance average crop yields across Russia". Interestingly, crops in the fertile southern Russia (Black-Soil Belt) will fall by 10-13 pc, while its less bountiful north (Non-Black-Soil Belt) will yield 11-29 pc more. Farmland will increase in overall area and will be able to support warm-weather crops in the north and tropical ones in the south.

Yet, even in the most optimistic scenario, farmers will face one more threat: the explosion of locust and potato beetle populations, along with some new pest species. "This will be a critical issue for Stavropol and Kuban, the major grain producers," Semyonov adds.

There is no stopping the impending climate change in the next 50 years. According to Vladimir Katsov, current policymaking will shape the environmental situation in the second half of the 21st century.

On 23 March 2009, Russia will mark the Day of the Russian Hydrometeorological Service for the first time. The decision to commemorate this day was taken in May 2008.

In April 1834, a Normal Magnetic-Meteorological Observatory was founded in St Petersburg under the "Imperial Decree" which had the power of a law and was signed by Emperor Nicholas I. Russia now has the Federal Hydrometeorology and Environmental Monitoring Service (Rosgidromet) headed by Alexander Bedritsky, who is also the President of the World Meteorological Organisation (WMO), which unites the national weather services of about 200 countries.

James Hansen, who heads the NASA Goddard Institute for Space Studies, was among the first to discern the link between global warming and human activity. In his testimony before the US Senate in 1988, the physicist said he was 99 pc confident that people themselves were responsible for the greenhouse effect.

Humankind is recognised as the culprit of global climate change by most major scientific associations around the world, such as the European Academy of Sciences and Arts, the Royal Society of New Zealand, the UK Institute of Biology, the European Federation of Geologists, the US Geological Society, and the Royal Meteorological Society of Great Britain. There are individual researchers, however - even within the above organisations - who disagree, either completely or partially, with the conventional views on what is causing global warming. Many point out there is no such thing as a global climate, so reference to any common indicators does not make sense. They also emphasise recent data from weather satellites, which have registered a slight cooling.

Three years ago, the Sunday Telegraph published an article by Professor Bob Carter of James Cook University in Australia, who argues that "There is a problem with global warming... it stopped in 1998... Climate changes naturally all the time, partly in predictable cycles, and partly in unpredictable shorter rhythms and rapid episodic shifts, some of the causes of which remain unknown. We are fortunate that our modern societies have developed during the last 10,000 years of benignly warm, interglacial climate. But for more than 90 pc of the last two million years, the climate has been colder, and generally much colder, than today. The reality of the climate record is that a sudden natural cooling is far more to be feared - and will do infinitely more social and economic damage - than the late 20th century phase of gentle warming."