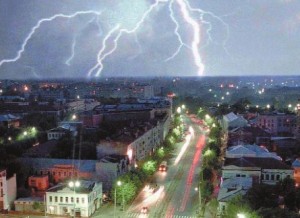 People think being able to control the weather is a fantasy, something for the future. But in Russia, there are experts who are already controlling it today. Moreover, they are laying the groundwork for mastering a range of geophysical processes and even the Earth's climate. This article takes a look at regulated ionisation.

As far back as the 1920s, the great Russian naturalist Aleksandr Chizhevskiy pointed out the interaction between solar activity and various natural processes on Earth, including the weather. He also drew attention to the role of ions in the atmosphere and their ability to absorb moisture. Today, ionisers that purify the air can be found in many homes. The prototype for these was the so-called "Chizhevskiy chandelier", designed back in the twenties. This "chandelier" bore an outward resemblance to the lighting chandeliers that were common in those days, but instead of producing light, it emitted a stream of electrons which combined with oxygen molecules to form negatively charged oxygen ions.

Scientific developments at the end of the twentieth century also shed light on one of the mechanisms of the Sun's influence on the weather. The Russian scientists Pudovkin and Raspopov demonstrated the importance of the influence of galactic cosmic rays on the Earth's atmosphere and the role of solar activity in modulating the flow of rays reaching the atmosphere. At times of enhanced solar activity, the stronger solar wind and magnetic field in the Earth's magnetosphere have the effect of partially slowing and deflecting the flow of cosmic rays, while in years when the Sun is calm the flow of rays reaching the atmosphere is greater.

How do cosmic rays interact with the Earth's atmosphere? The high-energy protons, of which cosmic rays largely consist, ionise air molecules. The ions produced become centres of water vapour condensation. The molecular clusters grow by attracting increasing numbers of water molecules, as a result of which clouds form. The heavier the cloud cover, the less direct solar radiation reaches the Earth's surface, and the less cool it is at the surface. Danish scientists have demonstrated a 95 pc correlation between the area of global cloud cover and the variation in flow of galactic cosmic rays.

Of course, there can also be artificial sources of atmospheric ionisation. Chizhevskiy showed that fine metal spikes supplied with a high electrical potential can be very efficient ionisers.

This idea was taken up by the Russian physicist Lev Pokhmelnykh, who created appliances that could generate ion streams over large areas.

A very fine wire can be imagined as a combination of a very large number of points. The longer the wire, the more intensive is the stream of ions entering the atmosphere and the more efficient is the appliance. There are various ways of designing the appliance itself, but the main objective is to increase the area generating ions. A high electrical potential is applied to the wire, which can be lower or higher than the potential of the corona discharge. This potential causes the ions of that sign to rise from its surface. As already noted, the ions are centres of water vapour condensation. As they rise under the influence of the electrical field, they grow to the size of embryonic drops, which eventually leads to the formation of clouds at an altitude of several kilometres. Depending on the sign and scale of the potential, this process can be accelerated or decelerated, and it is also possible to "disperse" the clouds, thereby creating cloudless weather. The processes of condensation and evaporation cause heat to be emitted or absorbed, which means it is possible to artificially change the temperature, including inside a cloud, bringing it to "dew point" and inducing precipitation.

When a high electrical potential is applied to the appliance's wires it makes the ions move upwards, away from its surface. Along the way, the ions pick up molecules of water vapour, which leads to the formation of clouds at an altitude of several kilometres. Additional adjustments to the appliance's potential even make it possible to change the temperature of "dew point" within the cloud and to instigate precipitation.

The theory has not remained simply a theory. The Russian physicist succeeded in practically proving its effectiveness. After moving to Mexico, Pokhmelnykh set up a company that over a period of more than 10 years successfully influenced the weather and the climate with the aid of these appliances. In particular, artificial rainfall was induced in dry regions of northern Mexico, which led to an increase in agricultural productivity.

The technology proved to be so effective that in the past two years it has been used to put out fires over large areas in the Yucatan peninsula at the request of the government of Mexico.

Pokhmelnykh's former colleagues in Russia did not forget what he had taught them, and over a number of years the technology was applied in the Krasnodar region, resulting in increased harvests.

The process can also be applied in a different direction. In the event of intense rainfall, reducing the quantity of ions in the atmosphere makes it possible to disperse the clouds - and this is what ionising appliances can do.

Consider the disastrous fires in California or Australia. If these appliances had been available there, although it might not be possible to extinguish the fires completely, artificial rain could have significantly weakened the scale of casualties and physical damage. Conversely, in the event of floods due to intense rainfall, it would be possible to substantially reduce the precipitation that caused the floods.

One further area of use for this technology is purifying the air in polluted cities. Radiation from special antennae can change the electrical charge in the atmosphere, thereby filling it with ions and killing microbes.

At the beginning of this article we talked about a mild effect on the weather by means of regulated ionisation. So what does this mean? Very often countries that rely on agricultural produce for the bulk of their national product, such as India, find themselves hostage to the whims of the weather. Protracted rains during the period when crops are ripening, or drought during the vegetation period, can often lead to humanitarian disasters and leave whole areas of the country with no harvest. These appliances can help make the weather less capricious by "prompting" the right levels and periods of rain and sunny weather. This kind of regulation will make it possible to achieve guaranteed harvests.

Sergey Poulinetz is Chief Research Fellow at the Institute of Applied Physics, Rosgidromet.