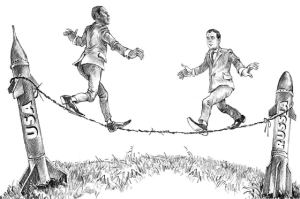 Russia and America know very well what the other side should not do. In Moscow's opinion, Washington should not deploy its missile defence shield in Central Europe, should not press ahead with Nato expansion to the East and should not rearm the Saakashvili regime. Russia, from Washington's point of view, should not meddle in the affairs of its neighbours, should not violate human rights at home and should not woo the dodgy regimes in Iran and Venezuela. But even if each side abided by the other's wishes, relations would hardly be on an even keel, because a relationship cannot be based solely on mutual bans and restrictions.

Even arms control is a manifestation of the same negativist approach to bilateral relations. Of course, a breakthrough in strategic arms cuts would be a historic achievement, yet although such breakthroughs occurred during the Cold War, they failed to banish mutual suspicions or prevent new spirals in the confrontation.

Perhaps the time has come to create a new positive agenda for Russia and the US. Such an agenda can hardly be worked out as long as there are so many irritants in the relationship. But let us forget for a moment about Iran, Georgia, missile defence and Nato, and instead look at the two countries' national priorities.

What are the real worries of ordinary Russians and Americans? Certainly not the time-frame of the deployment of missile defence in Poland and the Czech Republic or Ukraine's accession to Nato. Rather, what matters are those concerns that weigh on their day-to-day lives: unaffordable mortgages, the rising cost of education, the influx of illegal migrants, environmental degradation and other such issues.

That is where Russia and the US should seek common ground. Do we have any positive experience we could share with Americans? Do we face questions to which Americans have already found answers? Can both sides benefit from exchanging insight? Can we draw new stakeholders into the bilateral relations, going beyond the narrow framework of expert panels in Moscow and Washington, who are obsessed with the traditional security problems?

If presidents Dmitry Medvedev and Barack Obama really want to bring about a sea change in the relations between the two countries, the circle of participants in the dialogue must be dramatically enlarged. Apart from investing additional political capital, it is necessary to create a new framework to bring in educational institutions and municipalities, non-profit organisations and professional groups, local media and small businesses. It is important that the discussion of the new agenda involve not only the Foreign Ministry and the State Department, but also "non-core" ministries and agencies dealing with science and education, agriculture and energy, regional development and innovation.

Some may argue that the Gore-Chernomyrdin Commission set up in the early Nineties for these very purposes did not prevent a deterioration of bilateral relations, and that the commission was too bureaucratic and inefficient. However, things were still better with the commission than after it.

Furthermore, Russia is not what it was in the mid-1990s and a new version of the Gore-Chernomyrdin Commission would have a greater chance of success. Finally, the global economic crisis provides a powerful stimulus to cooperation.

Why shouldn't vice-president Biden and Prime Minister Putin try to improve on the performance of their predecessors?

Of course, the bureaucratic inertia that paralyses any new initiative has not gone away. That is why it is vital that the new Russian-American dialogue include a public dimension.

For all the twists and turns of Russia's political development in the past decade, it now has more potential partners for the "third sector" (i.e. the voluntary, or non-profit organisations) in the US. They range from big corporate charitable funds to tiny "single-issue" NGOs, from associations of universities to community schools.

Russia is changing before our eyes and these changes offer new mechanisms for fruitful interaction with the United States. Why not press these mechanisms into service today?

Andrei Kortunov is president of the New Eurasia Foundation in Moscow.