How Slavic beauty has taken the world by storm 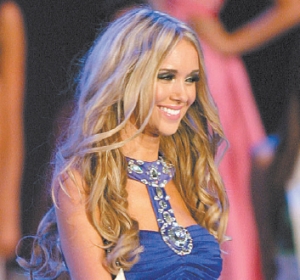 Kseniya Sukhinova is by no means the first Russian model to make a global impact. Russians are universally visible in the modelling business these days, but it really began back in the 1920s. Indeed, one could claim that the modern, and lucrative, modelling business began with Russian girls.
Aristocratic Russians in fashion

It's ironic that, to a large extent, the international success of Russian models is largely a consequence of the 1917 Revolution.

Upper-class émigré girls had to model for Parisian dressmakers in order to make ends meet. Strikingly beautiful and well-bred, they were in great demand at the top fashion houses. By 1930, about a third of all models in Paris were Russian. They were sought-after for their fair skin, blue eyes, high cheekbones and dark hair. Blondes, incidentally, didn't come into vogue until 1930.

Many Russian models worked at Coco Chanel, showing collections for rich clients and wearing Chanel to the theatre and elsewhere. They were the face of the brand, and a magnet for suave aristocrats.

Russian girls turned modelling into a trendy, upmarket business, especially since many of their careers culminated in good matches. For instance, one of the most beautiful models of the time, Natalie Paley, niece of Tsar Nikolas II, became first the face of the Lelong fashion house and then married its owner.

The Kremlin's most beautiful weapon

In the USSR, models also appeared - by Stalin's decree, when he approved the opening of the First Fashion House in 1944. In spite of the Iron Curtain, the world was aware of Russian models. Paris Match said they were the Kremlin's most beautiful weapon. At the time, being a model in the USSR was not considered proper (on payroll sheets, for example, they were referred to simply as "workers"). The public was scandalised by the girls' "indecent" appearance (think the unthinkable) in trouser suits. A Russian model could hardly make her way abroad, as few were allowed out of the country. Yet some managed it.

Galina Milovskaya, for instance, was signed up for a Vogue photo shoot in Red Square. It ended in scandal when the pictures were deemed too provocative by the Soviet authorities as they featured a model in a trouser suit sitting "saucily" on the Red Square cobblestones, with the Mausoleum and huge portraits of Soviet leaders in the background. But thanks to the scandal, Galina became internationally recognised - which later helped her to emigrate.

"They are like from another planet... and they are Russian!"

Soon after perestroika and the fall of the Iron Curtain, thousands of Russian girls rushed to explore catwalks around the world. Olga Pantyushenkova was one of the first not just to make it, but to reach the top 10 - at $10,000 a show. She was the face of Dior, Chanel and Valentino. The next star was Natalya Semanova in 1994, the first in a line of teenage models that followed.

The second wave of Russian models was kick-started by Natalya Vodianova, a girl from Nizhny Novgorod who arrived in Paris in 1999 and in no time had fashion capitals at her feet. It's a classical rags-to-riches story: a girl who, one day, was helping her mother sell potatoes at the market, and the next, picked up by 19 designers for their shows at the prêt-à-porter week in New York. The Cinderella fairy tale had, as it should, a happy ending. Natalya married her prince charming, the Hon Justin Trevor Berkeley.

Natalya is one of the top 10 most expensive models, thanks to her contracts with Calvin Klein and L'Oreal.

Since 2003-2004, the modelling business has grown to be largely a Russian one. "Now the girls are 16, 17 and Russian! They are like from another planet," said Karl Lagerfeld. Sasha Pivovarova, Natasha Poly and Vlada Roslyakova are the current queens of the fashion world. The invasion by models of Russian or Slavic origin is no longer a surprise - it is a trend.

Can this be explained just by the demand for Slavic-type beauty? Probably not. Who knows if there is such a thing as Slavic beauty? Take ravishing Natalya Vodyanova, or the "extraterrestrial" Sasha Pivovarova. Maybe the elusiveness of the Slavic type is rooted in the endless variety of unconventional beauty blooming throughout the vastness of Russia? That is probably why European fashion agencies prefer the Urals and Siberia to Moscow for scouting new faces.

So, the Russians are not just coming - they have arrived. As the journalist Ekaterina Vasilyeva wrote in her book Russian Models: "Thanks to the `Russian wave', Russia has become one of the `model powers'. This does not give Russian girls priority in the fashion business. It has put them on the same footing as other international models."


Dreams of sporting fame
Ksenia Sukhinova was born in Nizhnevartovsk, Siberia, on August 26, 1987. In school, she achieved all As and Bs; teachers remembered her as well brought-up and a stand-out. She was also very athletic: she was an adult-class biathlonist and dreamt of becoming a champion. Her specialities included swimming, gymnastics, ballroom dancing and track and field.
After graduation, Ksenia went to Tyumen Oil and Gas University. She became a fashion model and was soon Miss Tyumen, which did not go unnoticed. Point, a top modeling agency, offered her work. Last year, Ksenia worked in Milan at High Fashion Week. She then turned down a runway show in Prague in order to take part in the 2007 Miss Russia contest. She made the right choice. Today, Ksenia is continuing her university studies, although combining them with modelling work isn't easy. The same goes for her private life - Ksenia says she has yet to meet the man of her dreams.