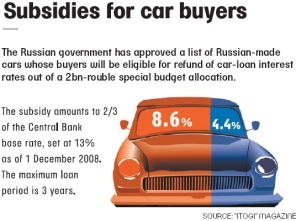 At the end of February, St Petersburg hosted Autoinvest, an annual international conference aimed at attracting investment to the Russian car component market. Ivan Bonchev, head of the automotive segment at Ernst&Young, believes that despite the crisis, Russia is one of the least saturated car markets in the world. As only 20pc of Russians own a car, the market is bound to resume growth in the next two to three years.

To what extent will the financial crisis affect the foreign car-makers operating in the Russian market?

Virtually all will see sales go down. This year the car market will shrink and its segmentation will change dramatically. The hardest hit will be medium- and upper-medium-sized brands, especially SUVs, whose sales were growing steadily. Budget cars will retain popularity even through the economic downturn, which is good news for companies who might gain a competitive edge by offering lower prices.

What are the prospects for the foreign original equipment manufacturers (OEMS) in Russia?

I do not think their strategies have undergone any radical changes. True, some companies have put expansion plans into cold storage for several months or even a year, but most OEMs are moving forward at a steady pace.

The Russian market is far from being glutted and has enormous growth potential. If the crisis is over within two years, the OEMs might reach target production capacities and substantially increase their market share in Russia.

How can Russian auto clusters help foreign suppliers tap into the Russian market?

Cluster development is one of the top priorities for all the stakeholders involved, notably the government, carmakers and car component manufacturers. They must join forces to step up cluster project development.

The car component manufacturers, following their OEM partners, need a well-developed infrastructure and state support to build business. Car clusters serve to facilitate their entry in the new market. This long-term process requires not only a more business-friendly environment, but also technological development of the market.

This year will see the deepest dip in sales and new car registration. We expect the market to shrink by 30pc, down to less than 2m cars per year. Yet the best-case scenario for 2010 suggests even a slight economic recovery will boost demand and increase market growth rate by 10pc against 2009.

When will the Russian car market emerge from the crisis?

The Russian car market depends on the general economic situation, primarily on energy prices before currency rates or other macroeconomic fundamentals. Optimists say the market will recover its growth rate by mid-2009, whereas pessimists do not expect any revival until 2010.

RN Dossier
The Russian car market - Europe's largest a year ago - is expected to shrink in 2009 by about 40pc from last year's 2.8m new cars. "The biggest problem is high interest rates on loans. They are falling around the world and only in Russia do they remain high. If they fall here, too, we can get a total market for about 2m cars. If not, it could fall to 1.5m. A year ago we were expecting this year to see more than 3m new car sales," says Dietmar Korzekwa, Volkswagen's man in Russia.